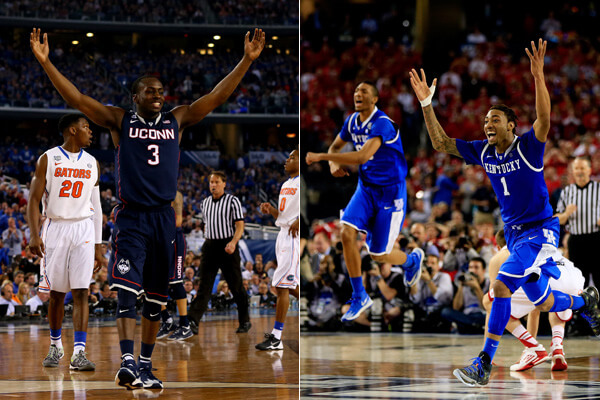 The Kentucky Wildcats and the UConn Huskies have gone through hell and high water to make it to this point. The Wildcats are the first team in NCAA tournament history to defeat 3 teams from the previous year's Final Four in order to get to the NCAA Final in North Texas. The Huskies are fielding a team with zero All-Americans and a second-year head coach in Kevin Ollie who's experiencing all of this for the first time in his life as the lead man. An 8-seed versus a 7-seed for all the marbles in Jerry's World? This is exactly how it's supposed to be drawn up.

In retrospect, what we must realize is that Kentucky and UConn are fighting for more than just another banner in the rafters. Understand that these two teams are the most successful basketball programs in the last 20 years, with each team winning three national titles in the last two decades.

If Kentucky wins on Monday night, this would mark a five-year run for John Calipari with two rings, three Final Fours and four Elite Eight appearances. While some view Calipari as the scourge of the earth, I'll continue to believe that the coach is thriving in an environment that mocks someone who exploits an obvious inefficiency in the system. Succeed and proceed.

If UConn wins on Monday night, we could witness a fourth legend be raised into Huskies lore along with names like Rip, Okafor and Kemba. We could also witness the crowning of the next young motivator in Ollie. Most importantly, we could be witnessing the Connecticut Huskies basketball program becoming a true blue blood, better than any school tied to the Big East and being the best school in the Northeast by far. (Although the men might never be as good as the women, but that's OK.)

If you get nothing else from this national championship, you should understand this one thing. We complain about how much the college basketball season means nothing before March, and we love that March Madness is all-consuming and wish that this One Shining Moment could last longer. Kentucky and UConn went through hell and high water to make it to this point, with freshmen woes, injuries and the struggles against quality competition that make for an interesting maturation process. By the time March gets here, the two teams that play on the first Monday in April are battle-tested and ready to claim their moment.

Now let's just pray we actually get a good game to watch. Here's your mandatory reading material for your Monday. Have a great one.

Wrestling With Alligators, or The Pursuit Of Objective Mascot Truth -- The Classical

One Reply to “Starting Lineups: On Kentucky, UConn And The Fight For Being Crowned King Of College Basketball”