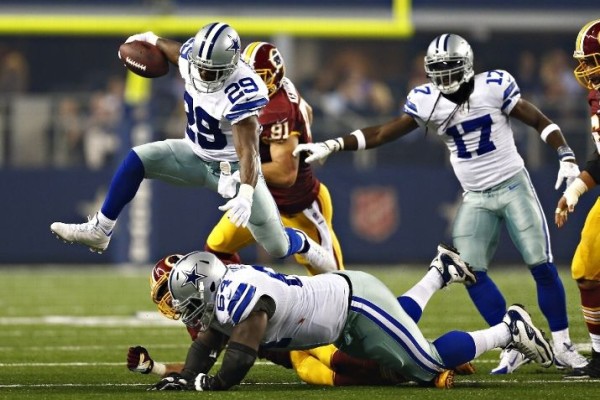 Let's just get this out of the way right now. I'm a DeMarco Murray homer. Ever since my manager Brent told me to go on YouTube to check out this kid who might be attending in Oklahoma, who in his words, "runs fast as greased balls and cuts like a weed-wacker" (I'm from Oklahoma, what do you expect?) named DeMarco Murray, I've always been a huge fan. Outside of All Day, there hasn't been a better tailback in the Bob Stoops era than DeMarco, and I've always believed that if healthy, he has a chance to be an elite tailback.

So when the Dallas Cowboys swooped up Murray in the 2011 NFL Draft, I called up our editor-at-large Kenny Masenda and told him that they just got the steal of the draft. For once, the man agreed with me.

Watching DeMarco Murray play football for the Dallas Cowboys has to be one of the most frustrating experiences ever.

You know how they throw those stats up during football games that say, "If player X rushes Y amount of times then team Z's record is 138-0"? Yes, those stats are stupid. They are also awesome. So when you see that the Dallas Cowboys, a team I hate like no other, are undefeated (13-0) when DeMarco rushes the ball 20+ times in a game, it feels unfair. Even if I do hate them.

Did you know DeMarco Murray is only one of three players in the NFL this season with over 1,000 yards rushing and a yards per carry average of 5.0 or better? You might recognize the other two players on the list.

The Dallas Cowboys have proved to be one of the most dysfunctional units in the NFL, and it's almost like they're trolling us all the way to the end of the season, just to see how much stress they can put on their fans. On Sunday afternoon, Dallas and Washington squared off as the Cowboys had everything to play for, while the Redskins are just dying to end their clusterfuck of a season. With their season on the line and a play needing to be made, the maligned Tony Romo went to DeMarco Murray, and the man delivered.

(It should be noted that DeMarco lost nine yards on the previous play, so like a real man would, he atoned for his mistake.)

To be fair, DeMarco Murray isn't the only player who has been criminally underutilized during their career, and he won't be the last. However, if the Cowboys are ever going to truly prosper, they'll figure out how to get #29 the ball even more. Because that's the smart thing to do. And this is the Cowboys we're talking about so … yeah, good luck with that.

Winning the World Series: from the players’ point of view -- Hardball Talk

Wish you were here! Toure and Aguero urge Barca star Messi to join them at Man City -- Mail! Online

Our God-Given Constitutional Right To A Television Show -- The Atlantic

Why The Brooklyn Nets Can't Turn Back Now - SB Nation