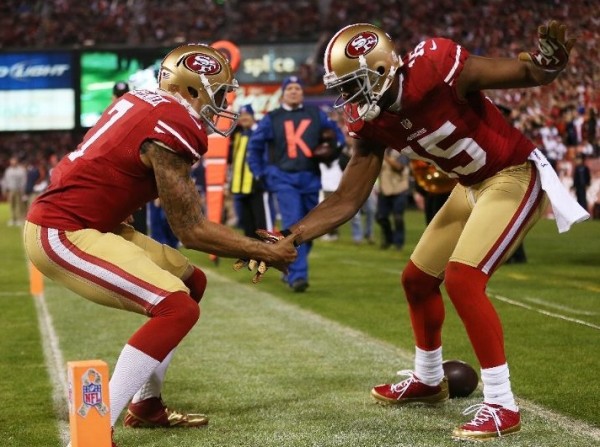 There are a few of you youngsters who have no clue who in hades Mr. Wally Pipp is. If you don't know who he is, then I'm going to redirect you and encourage you to read this first before you proceed.

Now, after a Monday Night Football monstrosity for the Chicago Bears, the San Francisco 49ers owned the home field with an impressive 32-7 win. While the rushing attack was strong all night and the defense was bludgeoning Jason Campbell at will, the story everyone is talking about is the play of Colin Kaepernick. The former Nevada signal caller completed 16 of 23 passes for 243 yards, two touchdowns and zero turnovers against the vaunted Bears defense.

Plus, it's not like Coach Harbaugh's making things any easier for the quarterbacks (and most importantly, us) with these types of comments about who'll be QB1.

“We’ll see. Usually tend to go with the guy who’s got the hot hand and we’ve got two quarterbacks that have got a hot hand,” Harbaugh said.

People forget how shaky Kaepernick looked just last Sunday filling in for Smith versus St. Louis, just as folks are already quick to forget how good Alex Smith played last year. To demote Alex Smith in a time like this would be the ultimate confidence crusher to a quarterback who's grown so much in the last 18 months. Moreover, while Kaepernick did an exceptional job backfilling Smith, let's not act like Colin transcended the position of quarterback. Those passes were mostly of the dump-off/screen/slant variety all night. That's no diss, but that's nothing different than what Smith's provided, plus he's got the experience.

None of this will matter though, as you're going to wake up on Tuesday and be inundated with conversation of, "Who should start, Alex or Colin?" People will scream to the high heavens feeling one way or the other, but it won't matter. This decision is up to Harbaugh, and if Harbaugh decides that Colin Kaepernick is the next Lou Gehrig, then Alex Smith, please allow me to introduce you to Mr. Wally Pipp.

Related: 6 Of The Funniest Sports Celebrations In Recent Memory

8 Replies to “Should Alex Smith Get Ready To Meet Mr. Wally Pipp?”