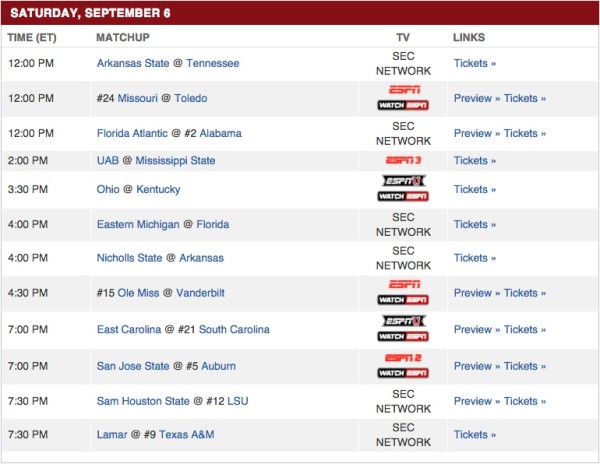 Look at that abomination of a Week 2 schedule. Jesus Christ.

I was invited to go watch Mexico vs. Chile at Levi's Stadium play in an international friendly on Saturday night, and it sounded like an awesome opportunity. But I knew where my heart lies, and what I'd be doing that night wasn't even in question. I would be watching college football. As it were, I decided to go online and check out the Week 2 slate of college football games. For whatever reason, I decided to show respect to the best college football conference in the world and check out the SEC schedule. What you see above is the foolywang I pulled up.

That shit is disgusting. Let's quickly rank the 12 games from "Mediocre" to "I'd rather watch 'Sex and the City' with my girlfriend":

South Carolina vs. East Carolina: I'd watch this game for the prospect of watching the Old Ball Coach and his Gamecocks come out the gate 0-2 in the Post-Jadeveon Clowney Era. ECU evidently has a sleeper Heisman candidate in quarterback Shane Carden who might be worth watching too. However, there's no chance I'm watching this game because Oregon and Michigan State will be on.

Ole Miss vs. Vanderbilt: This is the only SEC conference game this week. Yes, this is it.

Ohio vs. Kentucky: Because I used to live in Cincinnati and I know people from both states … a battle between terrible chili and delicious bourbon. Go Wildcats. 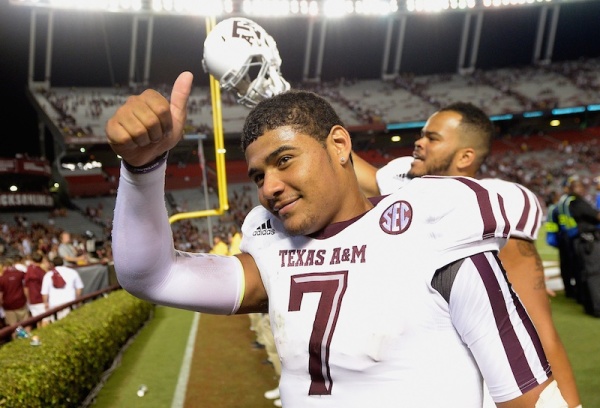 Texas A&M vs. Lamar: I hate that people are calling Kenny Hill "Kenny Trill" now. My catchphrase "Slang The Pill Kenny Hill" is better. Also, Lamar played my alma mater, Langston University, a few years ago. Langston's in the NAIA. Texas A&M should be ashamed of itself.

Missouri vs. Toledo: Maty Mauk has a cool name, and like Kenny Hill he slangs the almighty pill. Also, Toledo is horrible.

The "I'm Going To The Gym Instead" Games I Won't Watch

LSU vs. Sam Houston State: I watched Sam Houston State play Eastern Washington for the first game of the season in a FCS matchup. The Bearkats have dope uniforms. LSU's gonna roll these boys by 50.

Florida vs. Eastern Michigan: Florida's playing the team that couldn't knock down a wall of cinder blocks with sledgehammers. Yep.

Tennessee vs. Arkansas State: My good friend Nick Restivo is a Vols fan. I'd bet my life savings he doesn't watch this game. God bless him.

Arkansas vs. Nicholls State: Arkansas gave Auburn a good run last week, and Nicholls State … I just found out … is in the state of Louisiana. Never knew.

In conclusion, screw the SEC. These schools should be ashamed of themselves for this tomfoolery of a week 2 schedule. I get it, they play in the SEC, the toughest conference in college football. There's so many great coaches. (I guess.) There's so much SEC speed. (Whatever.) Nick Saban is God. (Not to OU and Auburn fans, heh.) If any of you lose, I will make fun of that team until the end of time. Or at least until the week 3 schedule begins.