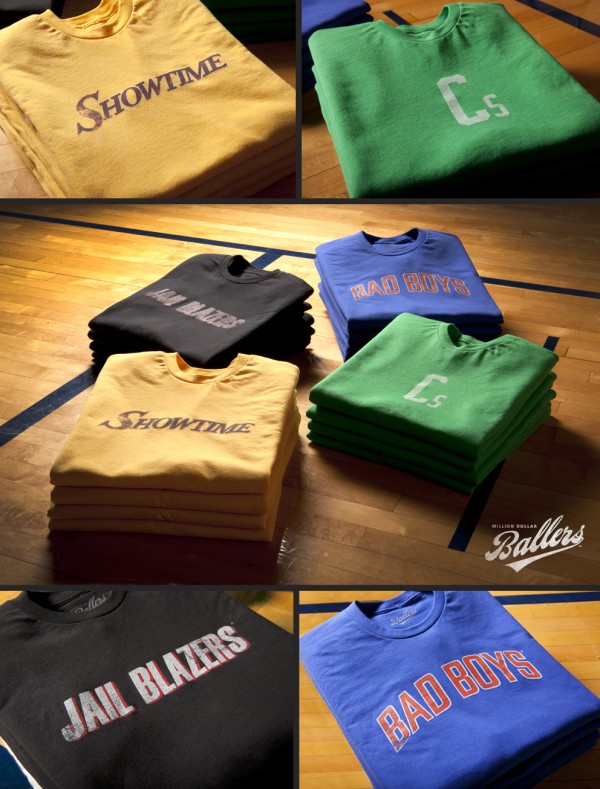 When I hear the terms Showtime, Jail Blazers, C's, and Bad Boys, those are the four names I immediately associate with them. They are the some of the preeminent stars of the 1980's and representation for four of the dominant teams of the era.

Awhile back, we profiled the work of Million Dollar Ballers, as their t-shirt collection pays homage to the legacy of the NBA back in the 1980's. In their first launch, they featured the illustrated faces (with no eyes) of the stars of the decade. From Kareem to Julius, the shirts were quite dope.

Now? They're going for the team's nickname and the immediate recognition that your brain uses to reminisce. “If you’re a fan, you know The Bad Boys, you know The Cs, you know Showtime, and you know the Jail Blazers. This collection is true to the fans,” says co-owner Greg Beers. Being true to the fans is the only option, and these tees are the genuine article. Co-owner Brian McGeorge explains, “Fans don’t always call their team the name on the jersey. These shirts speak their language.”

You can find Million Dollar Ballers at mdballers.com, on Twitter @mdballers, or at facebook.com/milliondollarballers. The shirts will drop on February 20th, just in time for the All-Star game.