By the time you've begun reading this, you've more than likely heard the latest update on the snowballing bad news coming out of the Oklahoma City Thunder's camp. If not, here's the update. Per SB Nation's Ricky O'Donnell:

Russell Westbrook exited the Thunder's game with the Los Angeles Clippers in the second quarter with a hand injury and did not return. After the game, coach Scott Brooks said Westbrook's (sic) has a small fracture in his right hand. Early indications are that he'll miss 4-6 weeks, according to The Oklahoman.

That's all anyone can really do at this point. I imagine OKC's treatment room looks like a MASH unit, as Westbrook is the seventh player on the team who will be wearing a suit on the sidelines. The suit-wearing crew for OKC is the following:

On Thursday night, as the Thunder traveled West to face the Los Angeles Clippers for their home opener, OKC fans had to resort to rooting for ... Perry Jones III? Dog ... Perry Jones III! Serge Ibaka was shooting threes like he was Jesus Shuttlesworth, Sebastian Telfair (!!!) took us all back to 2002 and reminded us that he was once on the cover of SLAM Magazine, and for just a few moments I forgot that every single player worth a damn for OKC was broken.

I went into a wild range of emotions on Thursday night that went from egregious to insane. Instead of trying to parse these out into thoughtful paragraphs of insight and knowledge, I'll just turn this into numbered bullet points of nonsense. Because numbered bullet points can help anyone make sense, even when that seems impossible. (Writer's tip.)

ONE: I have been watching Perry Jones III play basketball since he was a senior in high school. Initially, he was inspiring to watch. The dude was 6'11" and could literally do anything he wanted on the basketball court. Then, he was infuriating to watch, because I knew he could do anything he wanted on a basketball court but would tend to be as consistent as a flipped coin. Watching PJ3 step up with Westbrook, Durant, Jack … the entire team out with injury was incredible. 32 points, 7 rebounds, 0 turnovers. Man, what? I'm convinced that PJ3 is the next in line of otherworldly players like Lamar Odom, Tim Thomas and Anthony Randolph, in that they are capable of so much, but hardly ever able to meet our absurd expectations.

TWO: Did I mention Perry Jones III was incredible on Thursday night?

THREE: When I saw Russell Westbrook leave the game after injuring his hand and go toward the locker room, I was sick to my stomach. What did the Thunder organization do to deserve this? Did the Thunder ownership do some oil fracking in the backyard of Jesus Shuttlesworth? Good grief.

FOUR: I momentarily forgot everything when I saw Russ get into it with a fan.

FIVE: KILL HIM, RUSS, GIVE HIM HELL! 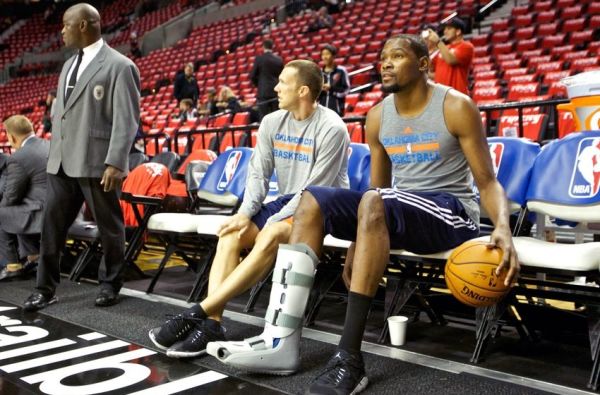 SEVEN: Kevin Durant is a skinny person. His walking boot is bigger than anything on him. Here is his limping, cheering his teammates on, and all I can think about is the fact that he looks like he has Excalibur's Stone on his ankle and the sword is the bottom of KD's leg. Related, I'm a nerd for that reference.

EIGHT: Serge Ibaka is stealing money. This man is incapable of doing anything worth a damn offensively without Russell Westbrook, Kevin Durant or Reggie Jackson feeding him the rock. Is this what $12 million a year gets you?

NINE: Is that … Serge Ibaka … running off of screens and pindowns …to shoot threes? Jesus Christ.

TEN: Sebastian Telfair will always have a special place in my heart. What that man did last night reminded me of why we fell in love with him 12 years ago while balling out of control as a member of the legendary Lincoln Railsplitters high school basketball team. For 38 minutes, Seabass gave Chris Paul everything he had. It wasn't that he was exceptional in his performance, but it was just the fact that he was valiant in his effort. Did CP3 put him in the blender? Yes. Did CP3 get away with superstar calls and foul the living hell out of him in the final possession? Yes. Did CP3 punch Julius Hodge in the nuts and become an untrustworthy individual in the process? Yes. (Okay, one of those isn't relevant.) The point is, Telfair may have never lived up to the hype we gave him when he was standing next to LeBron 12 years ago on that SLAM Magazine photo shoot, but there was another point when Seabass was looking at a life in which basketball as a career would cease to exist. The fact that he's still here, doing work in the process, is a success worth celebrating.

As it stands, the Oklahoma City Thunder are in trouble. I'm not sure if they're finished, but it's not looking good. Is it bad that this thought went through my head at some point last night?

With the 1st pick in the 2015 NBA Draft, the Oklahoma City Thunder select… …Jahlil Okafor, from Duke University.