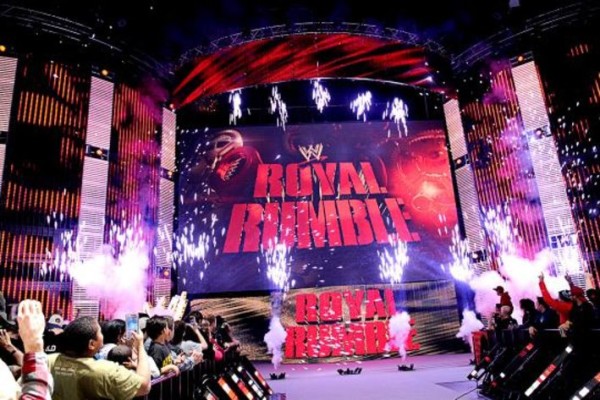 I'm not a die-hard wrestling connoisseur like I used to be, but now that the NFL season has commenced and my Monday nights are more free, I'm more willing to take my talents to USA Network for the theatrical reality television that is WW(F)E. Moreover, with a Sunday slate of programming that consisted of Billy Mays informercials, mediocre college basketball, the Grammy's (delayed on the West Coast) and Oregon vs. Oregon State ... wait, what? Oh, that was the Pro Bowl? My bad. Anyway, the point is, I had three-four hours to spare during the early evening, and as such, I decided to **legally stream the WWE's PPV, "The Royal Rumble."

In the limited amount of time I've watched the WWE over the past six months, Roman Reigns has a way of popping out on the screen. Like many other things, sometimes you see someone performing his craft and he has "it." Reigns has it, and since the formation of The Shield occurred, he and his nefarious crew of Seth Rollins and Dean Ambrose have run roughshod through all foes. The trio collectively is a well-oiled machine, but you also always knew that one day this gang of hooligans wouldn't last forever and that Reigns would be the breakout star.

So when the Royal Rumble kicked off, we knew that all three characters would be in the 30-man brawl. Once Roman Reigns got into the squared circle, the man started tossing people out the ring like Uncle Phil (RIP) used to toss out Jazz. Twelve eliminations (including his teammates Rollins and Ambrose) and a new record in hand for Reigns, the only thing that stood in his way from the ultimate glory in Wrestlemania 30 was Batista. Batista aka Dave, the guy who had been away from the ring for four years, was standing in the way of someone being ushered right into the flashing lights.

Then the WWE pulled a fast one on all the fans.

With one reversal move from hell, Reigns was tossed over the top rope by Batista. The guy everyone wanted to see be crowned was beat by Dave. All at once, Dave was going to be headlining Wrestlemania 30 and Reigns' run was seemingly over. Vince McMahon, Triple H and the WWE brain trust had hoodwinked and bamboozled the people once again. Instead it wasn't.

See, when Vegas sets the betting lines on sportsbooks, they don't set the lines based on how they think the games will play out. No, no, no. Vegas sets the line based on how they believe the betting public will wager its money. If Vegas gives the Broncos three points instead of two points versus Seattle in Super Bowl XLVIII, then we, the betting people, just might bet even more money in Vegas. Vegas is all about getting our money, and more often than not, they end up getting it. Similarly, the WWE is all about getting our eyeballs on its network.

The people will be rooting for Roman Reigns now more than ever. Batista, the guy who hadn't wrestled in four years, will be headlined in Wrestlemania 30 with people seething with rage, will wait with bated breath to see if/when he'll fall. In the wrasslin' business, they would say that Reigns is set up for a great baby-face run because the love for Reigns will be so over the top that he will probably be the face of the organization sooner rather than later.

Oh, and most importantly, I'm sitting here on a Monday morning, and I can't wait to watch Monday Night Raw and see what happens next. For this, I hate you WWE, you sick genius bastards. Business is indeed picking up.

5 Replies to “Roman Reigns, Batista And The Mad Genius That Is Vince McMahon And The WWE”