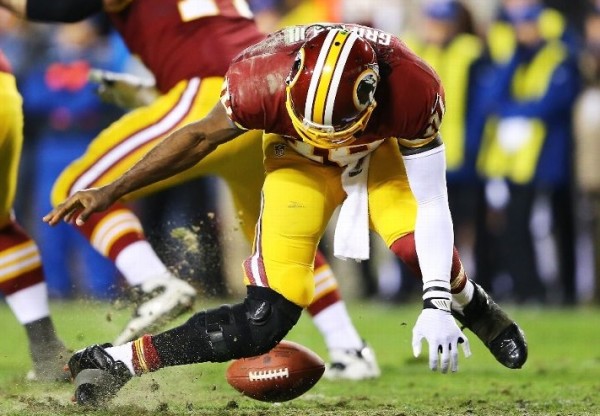 What transpired on FedEx Field Sunday evening was an attack on the conscience of sports fans everywhere. The Washington Redskins and their sensational yet hurt quarterback Robert Griffin III left the NFC wild-card game versus the Seattle Seahawks in the second half after re-injuring his right knee. A botched shotgun snap caused Griffin to make an awkward attempt to recover the ball, and during the recovery attempt his right knee (which was fitted with a Stone Cold Steve Austin-esque knee brace) buckled. RG3 crumpled to a heap on the ground. This was RG3’s third game playing since spraining the knee versus the Baltimore Ravens when Haloti Ngata had no regard for human life (or knees).

When RG3 re-injured the knee, I felt sick to my stomach. I was sad, mad and confused all at the same time, not really sure how to process what I just witnessed. Almost seconds after RG3 went to the ground writhing in pain, my phone started to ring, text messages started buzzing my phone and my Tweetdeck almost overheated and caught fire. What was most noticeable was the fury that was directed towards the Redskins’ head coach, Mike Shanahan. A man who back in week 10 thought that the ‘Skins were already playing for the 2013 season had consulted with his coach-saving quarterback and decided to leave RG3 in the game. As hindsight is always in abundance in times when it’s too late, everyone began ranting and raving that RG3 shouldn’t have even been on the field in the first place.

Of course, it wasn’t like Shanahan forced RG3 into the game, or that they didn’t have the support from the rest of the team. With quotes* emanating from the team like …

“We would not play Robert if we thought there was a risk of him further injuring that LCL.” — Mike Shanahan

“Mike asked me if I was ok. I said yes. I’m the QB of this team and I don’t think being out there hurt the team. I’m the best option for this team.” — Robert Griffin, III

“You could tell Griffin wasn’t 100% but he earned the right to be out there. Said Shanahan did right listening to RG3.” — London Fletcher

… unless RG3 seriously hurt himself further, he wasn’t coming out. Except for the fact that he did exactly just that.

There’s an understood belief that football players are to be tough. That when the big games are to be played, even if you are hurt, you should be out there laying it on the line. There is no tomorrow, only the today and the opportunity that lies in front of you. In our minds and in the history books, there are those who have laid it all on the line, with injuries that would shut down any sane mortal, and performed admirably under duress. There are also others who put their hands up and said, “I can’t go.” Be it for a damned good reason or not, many look at the unwilling as quitting on the team or being scared of the moment.

We remember the time vividly when Dallas Cowboys’ legendary tailback Emmitt Smith played with a separated shoulder late in the first half of the last game of the regular season in 1993, as the man re-entered the game and ran the ball 32 times for 168 yards and caught 10 balls for another 61 yards. Of his 229 total yards, Smith gained 78 after the injury. Or we remember the day when former Philadelphia Eagles wideout Terrell Owens was cleared to play in Super Bowl XXXIX after defying doctors’ orders by playing on his injured ankle containing 2 screws and a metal plate. Owens was the big-play threat that the Eagles had always dreamed of in having during the biggest of games, and the receiver finished with 9 catches and 122 yards in a magical performance.

8 Replies to “Robert Griffin III, Playing Through Injury And The Audacity Of Hope”

Robert Griffin III, Playing Through Injury And The Audacity Of Hope

Bull City Why You Should Watch The BCS National Championship…
8