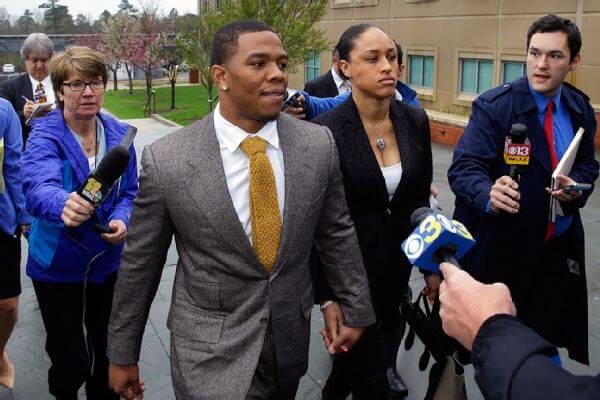 Ray Rice isn't the first person to put his hands on his significant other. He will certainly not be the last either.

The biggest NFL story of 2014 hasn't been the beginning of a crazy football season, the owner of the Indianapolis Colts having more coke than any reference Jeezy could spit in a lyric, Wes Welker being high as a kite off that molly while having his brain turning to mush before our very eyes, or even the backup quarterback of the Cleveland Browns going Johnny Football everywhere. No, the biggest story has been an issue that's plagued relationships since the dawn of time. Domestic violence.

Everything about the Ray Rice story sucks. From watching the Baltimore Ravens' tailback dragging his fiancee out of an elevator, to seeing Ravens' fans cheer their running back in his return to training camp, to seeing the commissioner of the NFL give the proverbial slap on the wrist for such appalling behavior. It's a good thing that we're talking so openly about the ills of domestic violence, but it sucks that this is a thing we have to talk about. No one wants to talk about it, but we have to talk about it. We have to do better as a people.

Then, TMZ somehow got more G-14 classified information and released another video of what caused the entire raucous between Rice and his soon-to-be wife, who wound up unconscious that night. Warning, the video below is graphic.

Unfortunately your browser does not support IFrames.

Even his Ravens teammates' have finally turned on Rice, as Bleacher Reports' Mike Freeman shares a text message from a player who says that Rice's support is now gone:

I can tell you this. I had a brief text conversation with a Ravens player I've known for some time who told me that the locker room before stood by Rice. Now?

"I don't think he has very much support now at all," the player texted. "I think it's gone."

The player added that one reason the locker room stood behind Rice was because Rice gave them the impression that he was defending himself from her (as ridiculous as the notion is of a weaponless, petite woman being a threat to a pro athlete). The video, the player said, betrays what Rice told players.

Truthfully, we here in the TSFJ e-offices debated like hell whether to post that video or not. We realize that for some of you that this will be your first exposure to the heinous act that occurred on that fateful night for the wife of Baltimore's starting running back. Well, used to be starting running back.

The #Ravens have terminated RB Ray Rice's contract this afternoon.

In addition, the NFL has indefinitely suspended Rice.

Here's the thing, I could ALMOST feel sorry for Ray Rice. Almost, because as I stated earlier, Rice isn't the first athlete to put his hands on his spouse. However, because the sports leagues we love so much depend on stars like Rice, Chuck Knoblauch, Jason Kidd and Floyd Mayweather, their punishments have always ranged from slim to virtually nonexistent.

Ray Rice decided to smack his woman up at the absolute wrong time. TMZ's deplorable ways that it goes about attaining its salacious news bits has somehow become a good thing. TMZ is now exposing the terribleness in the world, and Ray Rice was just another moved pawn in the never-ending quest for viral pageview world domination.

With that, I'll leave you with the words from Adam Schefter, who points out that in its simplest form, everyone here has dropped the ball.

Let's hope we never have to talk about this again, but since humans suck and we do stupid things, I'm pretty sure we will.

3 Replies to “Because Everything About The Ray Rice Story Sucks”