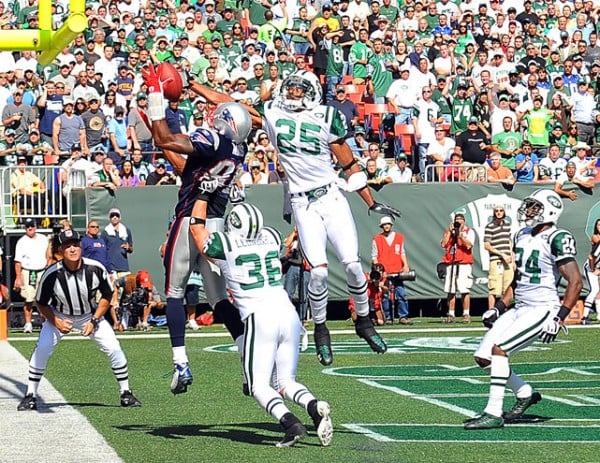 In this day in age with the advancement of technology running wild like Hulk Hogan and Hulkamania did back in our childhood, many of our favorite athletes are relying on social media to make their "announcements" public to the world. From Kevin Durant putting out a simple tweet to the world that he had re-signed with his OKC Thunder to Shaquille O'Neal putting out a 20-second video, via TOUT, on Twitter announcing his retirement, the need for the almighty press conference is slowly going out of style.

So when I heard that Randall Gene Moss was going to give it another shot in the NFL, I shrugged it off as another joke gone bad. However, when I saw the UStream video of Moss talking about it....I officially got the goosebumps:

[...] my heart and my mind wasn't really into it, man, 'cause I had some things going on off the field, so now that I've been able to address those problems, and tried to get a grip on things ... you know, I had a talk with my family and they let me know, 'baby, it's fine, whatever you want to do.'

Your boy is gonna come back and play some football, man. I'm very excited. Like I said, man, I just had a lot of things that I had to adjust in my life, man.

Faith, family, and football, man. That's my M.O., bro. If one of those three is off balance, man, then you get a mad, disappointed, and sad Moss [...] hopefully I get on a team, man, and hopefully I can finish this thing the way I want to."

Even at 35 years old, if Randy can get down the field and stretch a defense periodically throughout a game, then he's worth every penny a team offers him. There will be plenty of speculation on who will try and acquire the services of Moss, but there are only three teams that should actually make that move.

Arguably, the best receiver in the NFL for the last 3-4 years has been Andre Johnson. No matter if he's double-teamed or not, he can do everything on field and Matt Schaub has no problem finding him. Couple that with the emergence of the power running game installed by Gary Kubiak with Arian Foster and Ben Tate, and the Texans have one of the most balanced offenses in the league.

The Randy Moss Effect: You put Moss opposite of Johnson, and you can end any thoughts of a double-team coming Johnson's way, and this signing would officially force me to make the Texans my pick to win Super Bowl XLVII.

Did you watch Super Bowl XLVI? Outside of the one long completion that Tom Brady completed to Chase Blackburn, who plays for the New York Giants, the Patriots were unable to get the ball down the field. While this year's Super Bowl felt like the Giants were simply the better team, the Super Bowl four years prior will always feel like an aberration. The 18-1 Patriots might've been the best football team I'd ever seen.

The Randy Moss Effect: Gisele probably won't be chastising Brady's receivers with Moss on the squad. Not because Moss won't drop a pass or two, but Gisele's not that insane to talk crazy to Randy. Remember, this is the same man that "bumped" a female police officer with his vehicle.

Look, West Virginia ain't but a quick hop, step and a jump away from Charlotte. Randy could hop into his ol' pickup truck and make the drive down to the big city and get his roll on with a much more talented and competent version of Daunte Culpepper in Cam Newton. Plus, I have a feeling that Steve Smith and Randy Moss would get along just fine, talking crazy to defensive backs, telling stories about fishing and enticing rookies to get into fights during training camp.

The Randy Moss Effect: Seriously, if Randy Moss gets to Carolina, then I will start a petition for Hard Knocks to touch down in Charlotte for four weeks in August. There wouldn't be a more glorious thing to watch on television....oh, and the Panthers offense would be live, too.

4 Replies to “Randy Moss Is A Free Agent? Here Are Three Teams That Should Sign Him”