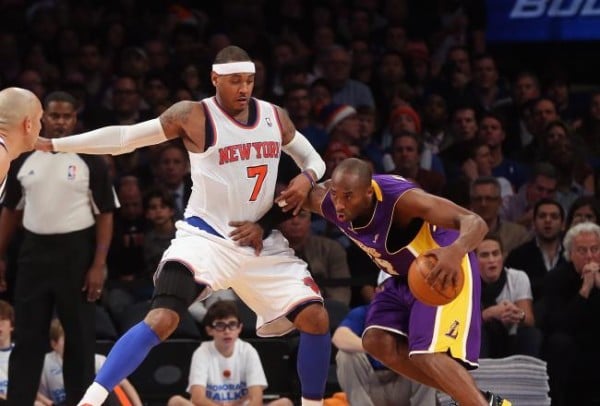 I can speak for B-Lew, Kenny and Tinsley when I say that one of the best guests we've ever had on The Unsportsmanlike Conduct Show is the homie @SHERMradio. Sherm is hilarious, especially considering the fact that he is a Chi-town resident who is a Miami Heat fan, dude is nuts. Anyway, the man tweeted something the other day while Carmelo Anthony was getting off once again with another 40+ point performance.

"Carmelo Anthony is doing a great job in locking up all those 3rd place votes for the MVP race." -- @SHERMradio

That's what its come to in the NBA these days. Saying that the MVP should just be written in stone with LeBron's name on it for the next 5-6 years is accepted by almost all hoop fans. The fact that Kevin Durant can continually lead the league in scoring while achieving the triple-double for shooters with the 50/40/90 percentages (field-goal, 3-point and free-throw shooting) will probably lock up all the 2nd-place votes. The debate for 3rd-place is a different story altogether and is actually a fun debate. Consider the following with a few of the candidates:

Who would you choose for 3rd-place in the MVP voting, you know, if you could ACTUALLY vote. Is it one of the players listed above, or is it someone I haven't listed? Let us know your thoughts in the comments section.

8 Replies to “QOTD: Who's Your Candidate for 3rd Place In The NBA's MVP Voting?”