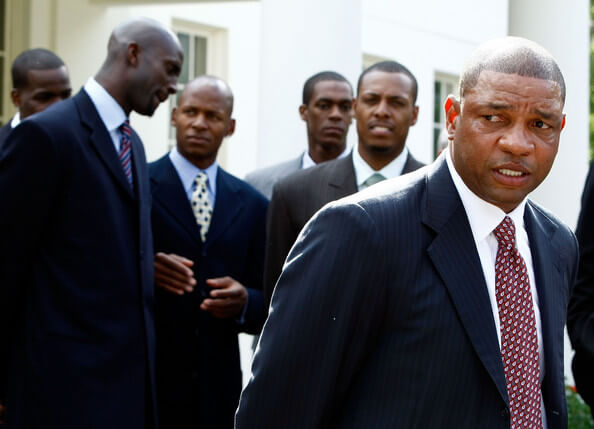 Glenn Rivers probably didn't see his life past his playing days in the NBA going quite like this, but now the man affectionately known as "Doc" is being counted on to cure basketball's biggest franchise joke and provide the ailment to make the Clippers world-class performers on the biggest stage.

The man who brought us "Ubuntu" in Boston is taking his talents to the other team in Los Angeles. Some words from NBA.com's David Aldridge about the cross-country move for Rivers:

The deal, completed in principle Sunday night, will allow Rivers to get out of the rest of his five-year, $35 million contract with the Celtics in order to go to the Clippers. L.A. will send an unprotected 2015 first-round pick to Boston as compensation. Rivers will get a three-year, $21 million deal from the Clippers, a compromise by both sides.

A source indicated that Rivers will also have more say about basketball decisions with the Clippers than he did in Boston, where he had a good relationship with Celtics general manager Danny Ainge. But Ainge nonetheless had the final say.

So here lies the Ubuntu Celtics, born in 2008 and put to rest in 2013, and the end of an era for the Celtics. With the exodus of Jesus to Miami finished last year, the futures of KG and Pierce up in the air, and the return of Rondo as the new face of the franchise moving forward, this was a surprise to hardly anyone who paid attention. This Boston team was very easy to appreciate (or hate), and for five years there was a sense that this is a great way to play basketball. To enrich each other, to sacrifice for one another. To be generous and committed to a unified goal. You know, Ubuntu.

There are three things that will always stick out to me with this squad, in no particular order.

I can't explain the energy I had when I realized that these three dudes were really about to play together. It made me think back to the time when the Lakers brought Wilt Chamberlain, Jerry West and Gail Goodrich together or when the Rockets trotted out the Hakeem Olajuwon, Scottie Pippen and Charles Barkley trio. There's a curiosity in wondering what this is actually going to look like. Would it work? Can they play together? Is this even real?

It was oh so real, and this interview was just awesome.

They Were One Game Away

Last year, with KG looking like an old man, Pierce's facial hair still full of struggle and Shuttlesworth at odds on his role within the offense led by Rondo, I was sure that even Ubuntu couldn't save these C's. Then the playoffs began, and we were blessed with Miami vs. Boston in the ECF. What transpired were seven of the guttiest games I'd ever seen, and through five of them, Boston looked poised to ruin Miami's Big 3 wrestling promo once again. The Kang would land the haymakers that eventually put the Celtics down for good, but I'd never been so proud of a team that I wasn't really a fan of.

There's never been a player like KG, and I suspect that we won't see another like him ever again. When Boston won its 17th title in 2008, Michele Tafoya and Garnett came together for arguably the greatest postgame interview of all time, as a pure, unfiltered and relieved KG let the world know how he felt.

What was your favorite moment of the 2008-13 Boston Celtics? Let us know your thoughts in the comments section!

5 Replies to “QOTD: What Was Your Favorite Moment Of The Ubuntu Era?”