Good morning live from the Fox Sports 1 Opening Drive tour bus (aka The HarBus) as we depart the state of Michigan and take our talents to our next stop, Chicago. Throughout the tour, we'll provide a morning recap of the news, commentary, tidbits and whimsy that surrounds our tour stops, Michigan vs. Utah on September 3rd and college football as a whole. 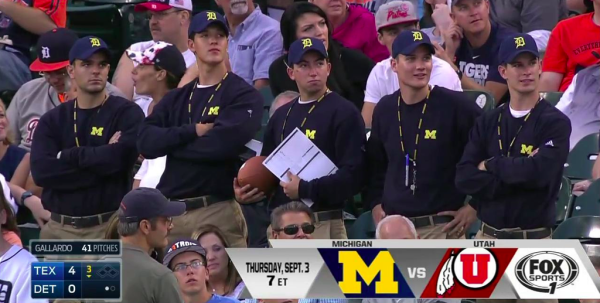 Khaki Clones at Comerica Park. (Avery Stone, For The Win)

Harbaugh was too busy hosting UM students at practice instead of hanging with the HarBros. (Extra Mustard) 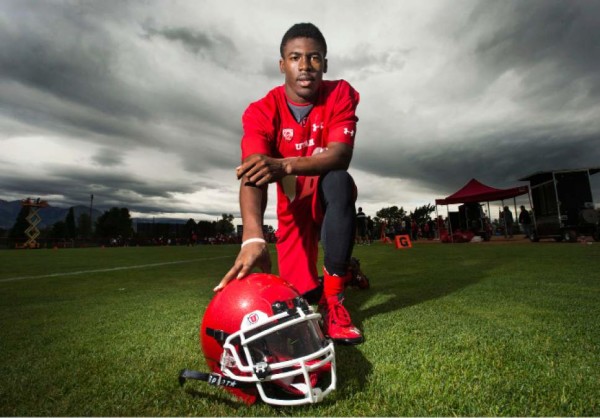 In case you missed it, Michigan's wearing all-white road uniforms for the first time since 1974. (CBS Sports)

A Kansas quarterback wore a GoPro on his head during practice. Trippy stuff. (College Football Talk)

Hey college coaches, the son of Randy Moss is still available to be signed. Hurry up. (NFL.com)

On Saturday night, a group of friends took me out on the town in Detroit to play a newly created game called Fowling. Fowling is one part football, one part bowling and one part cornhole. Essentially, you setup bowling pins on long wooden boards across from each other, about the distance of a bowling lane, then you attempt to knock down the pins by throwing the football. First to knock all ten pins down wins.

This is me failing at Fowling. The newest game in the world, I think.

This game sounds simple, and yet I failed miserably in trying to play this game at Fowling Warehouse. Click on Detroit did an awesome write-up on the founder and the origin of the game.

We'll see you in Chicago, be on the lookout for the HarBus as we roll through America. Use the hashtag #FS1OpeningDrive and follow us on Twitter at @edthesportsfan, @yardbarker and @FoxSports1 for more updates on the tour.