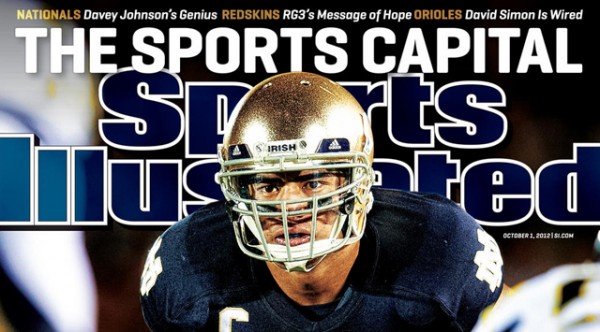 The Oklahoma Sooners are one of the true powerhouse programs of college football. When their schedule was released for the 2012 season, every Sooners fan circled a couple of games.

The Red River Shootout is always the first game circled, as making the annual trip down I-35 South down to Dallas to play the Texas Longhorns has become a right of passage for the boys from Norman. It's the marquee rivalry game that everyone across the country knows about, and its impact on a national championship every year can be substantial.

The second game that's circled is Bedlam. Oklahoma vs. Oklahoma State might as well be the civil war of the Sooner state. Going up to Stillwater on a cold November night means seeing 60,000 'Pokes fans clad in orange and black with the guns up, and Okie State slanging the pill around the yard. Always one of the best games every year.

However, when this schedule was released in the off-season, there was one game that jumped off the page as soon as I saw it. The game represented a clash of college football blue bloods, and it was one team that draws more hatred from people than even Oklahoma. That team was the Notre Dame Fighting Irish, and this is the most important game Oklahoma will play all season.

@6magazine @the_broccoli @edthesportsfan I'm a Sooner born And a Sooner bred, And when I die I'll be Sooner dead.

This is a tweet from my homie Nick Restivo. You have to understand something about Nick, and I'm not calling the man out, but the homie played tight end for the Tennessee Volunteers awhile back. I respect the man's viewpoint on a variety of things, but I was downright flabbergasted when this man started hitting me with this type of commentary. As soon as Sunday hit, this man was 100% in with the Sooners, with the reason being that his hatred for Notre Dame was so high that he'd switch his allegiance to Oklahoma for one week in hopes that the Fighting Irish would lose ...

... and he's just one of many friends I have that feel the same way.

"I HOPE OKLAHOMA BEATS THE DOGSHIT OUTTA THE IRISH!"

Those are just a few texts, gchats and tweets I've received thus far.

In reality, this is Oklahoma's national championship because the Sooners already fumbled (pun intended) their real opportunity at playing in the title game by losing to Kansas State back in September. Yes, theoretically OU could backdoor its way into the game, but I just don't realistically see that happening.

What I do see happening is Notre Dame finally playing a team worth a damn. Yes, the Irish defeated three ranked teams earlier in the season, but only one of those teams is ranked now. That win over the Miami (FL) Hurricanes means nothing at all whatsoever. Notre Dame needs a win over Oklahoma for credibility, respect and to make people hate them less. Truthfully, people don't "hate" Notre Dame for anything that's happened on the field. More so, they hate Notre Dame for the insane amount of coverage the Irish receive, especially when it doesn't feel deserved.

Oklahoma's not about to allow Notre Dame to actually earn some respect, are they?

4 Replies to “Oklahoma's National Championship Is Saturday Versus Notre Dame”