"Man, I didn't think we'd beat the brakes off of Oklahoma State like that. I need a drink." – Uncle Bill

My Uncle Bill is not only the seminal father figure in my life, but he's also serves as a good barometer on the quality of our favorite college football team, the Oklahoma Sooners. So when he called me midway through the third quarter of Bedlam as OU was up four touchdowns, I picked up the phone curious as to what he had to say. My Uncle's tone was muted, as he sounded almost beleaguered to what was being broadcasted by his cable provider. I shared in my Uncle's befuddlement, as the reality we were facing as Sooners fans was a simple one.

Are the Oklahoma Sooners really this good? Are they worthy of a #3 ranking? Can they actually win a national championship?

Don't take this as cautious pessimism, although if you know me, then I understand you questioning my ability to be objective about my provincial love for the Sooners. However, there are a few things that are unquestionably true and should ring all the bells and whistles of concern relating to a team being Final Four worthy.

ONE: OU's loss to Texas is the worst loss in college football this season

The fact that OU has been able to rebound from such a heinous loss is remarkable, but the moment the clock hit triple zeroes in the Cotton Bowl with Texas escaping with a 24-17 win, I penciled the Sooners in for eight wins and a trip to the Independence Bowl in Shreveport. Texas is an awful team this year (even if they had three losses decided by three points or less) and are currently ranked 104th in total offense and 86th in total defense (out of 128 FBS teams) with one game remaining against Baylor. Those rankings are probably going to get worse.

Given OU's stature this season, the loss is inexcusable. Some might say that Oklahoma has a non-conference win over an eight-win Tennessee plus three big conference wins over top-25 ranked Baylor, TCU and Oklahoma State to lean on. That's when I remind you of the following...

Technically that statement is not 100% accurate, as Oklahoma State's QB1 Mason Rudolph limped in for three pass attempts, one of which was a pick-6 interception that essentially buried the Cowboys. 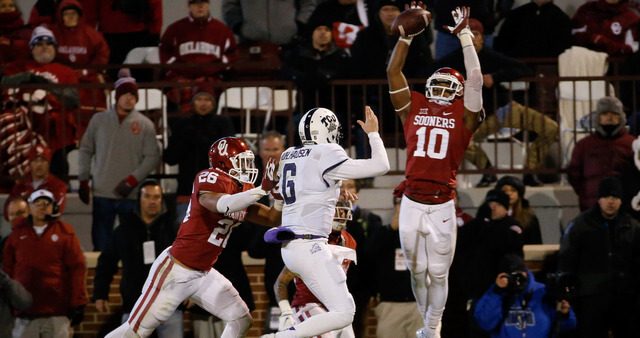 Oklahoma's November schedule was served to Bob Stoops as a gauntlet to determine whether his Sooners were actually legit this season. On the road at #6 Baylor, at home vs. #18 TCU, on the road at #11 Oklahoma State. Three big wins later, OU clinched their place in the Final Four. However, under closer examination...

Oh, and that Tennessee victory? Bob Stoops said it "maybe my favorite" win of his career, because Oklahoma had no business winning that game.

THREE: This might be the stupidest team in OU history

There's a great benefit in young and stupid, as that lack of awareness can allow for people to try and do things they have no business doing.

Watching Eric Striker blitz on every single down is part lunacy, part genius and part stupidity. It's one thing for Mayfield and Striker to play with reckless abandon, partly because their ambition is what drives OU's success, but the rest of this team suffers mightily from lacking judgment, awareness and intelligence.

It's one thing to suffer from blown coverages in the secondary or being penalized for being aggressive, it's another thing when players are tagged with unsportsmanlike conduct penalties in the biggest games or when you quarterback decides to try and win the football game by himself. This is the life and times of a Bob and Mike Stoops coached football team, as the temperature can get really hot or cold. This year, OU has found a way to not overheat, but the radiator's been through hell and back this season.

In a conversation with my brother and fellow Sooner fan Kenny Masenda, we rambled for a bit following OU's drubbing of Oklahoma State, this is customary fare for the both of us. Usually I'm long winded and full of commentary to share while Kenny either agrees quietly or tells me I've lost my damn mind. This time, my thought was simple focused.

Baker Mayfield has been the best quarterback in college football this season and will be in New York for the Heisman Trophy ceremony. Samaje Perine and Joe Mixon is the best running back duo in college football and both will be playing on Sundays for a long time. Sterling Shepard is now one of the three greatest receivers in Sooners history. There's first-round NFL talent on the offensive and defensive lines for the Sooners, and the back seven is loaded with speed and athleticism...

...and yet I'm terrified to see what happens with Oklahoma in the Final Four. They are the biggest enigma in college football, and the quicker you embrace that fact, the easier it will be to manage your expectations.

If you know an Oklahoma Sooner fan, do them a solid for the holidays and buy them a gift of their favorite vice. Trust me when I say their nerves are shot, they stare off in the distance for minutes at a time, and they're totally unsure of what will happen on New Years. Now if you'll excuse me, I'm going to go smoke a cigarette and wonder what the true meaning of life is.

8 Replies to “The Oklahoma Sooners Scare Me: 3 Reasons Why I'm Skeptical Of OU's Place In The Final Four”