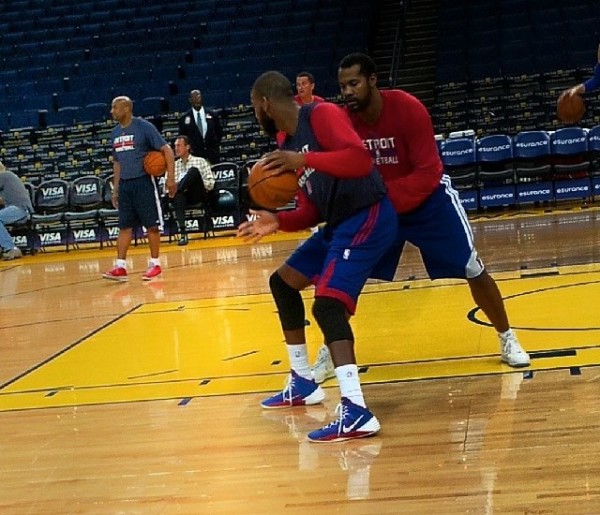 It was the retort that I expected when I walked into the Detroit Pistons locker room on Tuesday night. Sure, there were other players in the room that I would've liked to have asked questions to,  as guys like Brandon Jennings, Chauncey Billups, Josh Smith, Will Bynum and Greg Monroe are all intriguing to me. However, they weren't on my radar. I wanted to talk to Rasheed Wallace, and I was terrified.

I got to Oracle Arena earlier than usual on Tuesday to watch the Golden State Warriors lambaste the Detroit Pistons in a 113-95 victory. However, when I got to Oracle and got relaxed, I had some time to get out to the court early and watch players get shots up, work on a few things and whatnot. Sure enough, when I got to the Pistons side of the court, there were two guys going hard at each other in the post, talking crazy, working up a sweat and, most importantly, keeping score.

Up and unders, fadeaways, baby hooks and drop steps were being executed to perfection by Greg Monroe, the face of the Pistons franchise. Opposite of Monroe was Sheed, in his usual attire, a wrinkled sweatshirt and hoop shorts with those familiar white-on-white Air Force 1 high tops . There, on the basketball court, was the student versus the teacher. Even more than that, it was the carpenter who had plied his craft for decades in a position to give his past experience to someone else. This was 90 minutes before tip.

"But now that I’m coach, I can still have my passion, but I just have to tone it down. I can’t make the difference now. I can talk junk, but I can’t back it up." -- Sheed, July 9th

There was someone else I needed to talk to, and that was Jermaine O'Neal. If anyone knew what Monroe and Drummond were going through with Coach Sheed it would be J.O., right? O'Neal spent his first four seasons in the NBA serving as Rasheed's understudy while going to school with the Portland Trail Blazers. As soon as I brought up Coach Sheed, a wide grin broke out on his face.

"He was the guy who really helped raise me when I first got drafted. To this very day, Rasheed Wallace would've been the best post player this league could've ever had. He was virtually unstoppable, left hand and right hand, with a turnaround jump shot that was virtually unstoppable. He was always in my ear about developing, to stay confident and to stay focused as a younger player. He made sure that there wasn't any pressure on me, but he was definitely hard on me ... for all four years. It was like going to the University of Sheed. Sheed was the catalyst for pushing me being the player he thought I could be." -- Jermaine O'Neal

First there was Coach Sheed; now there's the University of Sheed. Amen to that.

Charlotte Bobcats: Early Season Success, Enjoy It While It Is Here -- Bull City State of Mind

Mexico Are Definitely Going To The World Cup. Right? -- Deadspin

Don’t Send A Pelican To Do a Grown Man’s Job: Xavier Henry Baptizes Jeff Withey -- Day and a Dream

The Case for Heavy Beer -- Esquire

Dan Patrick Show: Has the student-athlete become extinct? -- Beyond The Arc

7 Replies to “Starting Lineups: The Observation Of Coach Sheed”