Let's get the particulars out the way first.

On Tuesday, Nike officially unveiled Kevin Durant's latest signature sneaker, the KD8. The latest creation of Nike designers Leo Chang and Thomas Bell features both Flyweave and articulated full-length Zoom Air, two firsts for Nike Basketball. (These are shoe elements you might normally see in a running shoe or a trainer.) 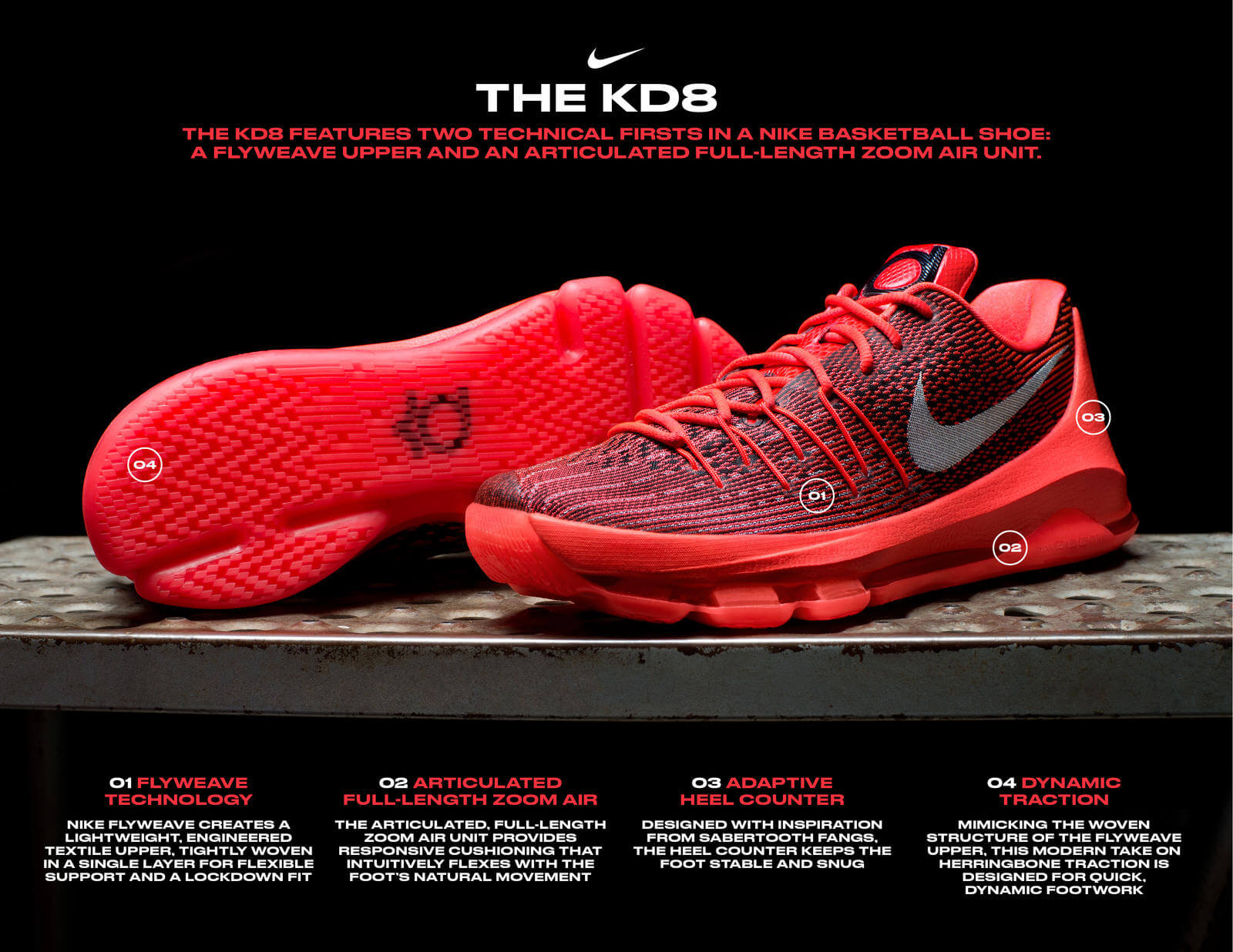 Here's Chang speaking on the technical aspects of the shoe while reminding us of what makes KD pretty awesome:

It is the most technically precise shoe we’ve designed for Kevin. Flyweave is optimal for his multidimensional skillset and footwork as he jumps, cuts, jabs and accelerates.

How many players can run the floor with the speed and fluidity of a point guard, while posting up with the height and technical footwork of a power forward? This hybrid makeup inspired the KD8 performance design and colorways authentic to #35.

What's clear here is that Nike and Durant are intensely focused on taking care of KD's most valuable (and risky) assets, his feet. Here's more from Durant on the KD8:

When I first tested the KD8, I instantly loved the springy response of the Zoom Air combined with the natural feel of the Flyweave. I didn’t want to take it off.

What's important to note about the release of the KD8 really doesn't have much to do with the shoe as much as the person who will be wearing it next season. It's June, Kevin Durant is currently in the Bay Area to promote his new shoe release, hanging out with the Oakland Solders AAU squad, working out kinks in his game and preparing for the upcoming season.

Life has returned to normal for Kevin Durant, and basketball fans everywhere (especially in Oklahoma) are happy to see him moving and shaking like he always has since he was put down for the rest of the season after suffering a severe foot injury.

This time a year ago, the Oklahoma City Thunder were licking their wounds (especially Serge Ibaka) after losing to the eventual NBA champion San Antonio Spurs. Now, this team is in an interesting state of flux. Russell Westbrook just completed one of the most incredible seasons we've ever seen. Every player on the OKC roster missed at least 8 games due to injury. There's a new sheriff in town with Billy Donovan now installed as the head coach. Oh, and there's that looming free agency lurking around the corner at the end of next season. No big deal.

For today though, none of that matters. The path to recovery is one built on being gracious and thankful. For me, that means that I'm grateful to this great game of basketball, because it's given me so much. Also, that I'm thankful to see KD moving around doing KD-things.

Even if that's just mingling with the people, showing off his new kicks and being around the game of basketball. That's good enough for me.