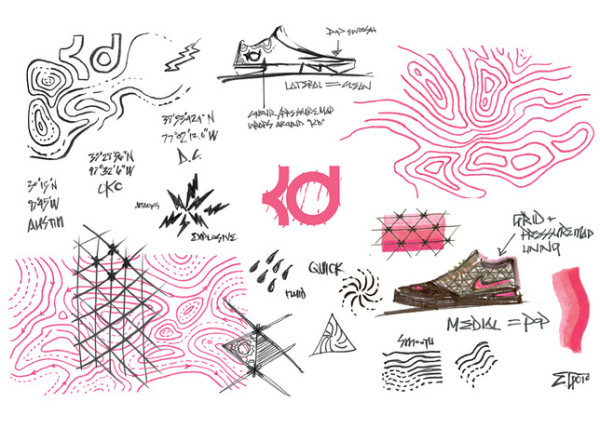 I always wanted to be a weatherman growing up. I like natural disasters so I’ve made a really nice shoe that reflects that."  -- Kevin Durant

There's something mildly insane about hearing a "historically great wing player" (those words belong to Grantland's Zach Lowe) who just so happens to rain down jumper after jumper on his opponents say that he likes natural disasters. Somehow he, the one who dishes out catastrophic dunks on people's necks like meteors falling from the sky without hesitation almost feels cruel and insensitive. This is how Kevin Durant gets down, from his game to his kicks. The "Weatherman" edition kicks under the Nike KD series have always been popular, and in this latest iteration the folks from the Swoosh have laced KD with a nod to the stars above with the Nike KD VI "Meteorology."

Although Kevin Durant dreamed of playing professional basketball as a kid, he had a fallback plan — pursuing a career in meteorology as a TV weatherman. Durant's hoop dreams became reality when he was drafted by Seattle as the No. 2 overall pick in 2007, but his early fascination with the weather live on in the new KD VI Meteorology colorway.

Built for Durant's versatility, the KD VI allows him to play as quick as a guard yet as stable as a center. Inspired by the technical detailing of a precision wristwatch, designer Leo Chang took this shoe to new places with a low and lightweight silhouette. It features Nike Flywire, Nike Zoom, Max Air and Hyperfuse construction.

The stars will align for copping a pair of these on August 3rd at select retail locations and Nike.com. The Nike KD Elite Crew Socks matching the KD VI Meteorology shoe are now available at Nike.com. Me personally...I want those damn socks. I bet I can click my heels three times in those socks and go back to Rucker Park circa 1977 and watch the beautiful game being played under the stars. Or something.