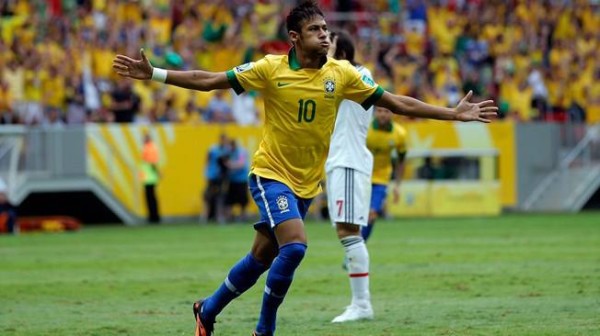 In this day and age of the internet, becoming a Youtube sensation is something we've just become used to. High school football players create these mixtapes and gather hundreds of thousands of views on their video by running wild through a bevy of overwhelmed prepsters. We've seen amateur basketball players create mixtapes by dunking on hapless teens or doing insane crossovers that send kids into detention. However, another sport that has created internet buzzes around players is soccer, and currently there isn't a bigger footballer with curiosity revolving around him than Neymar.

Neymar da Silva Santos, Jr. has been deemed the next great Brazilian superstar by those in the know, and for the last few years the forward has been applying his trade for the club Santos in his home country. Soon the Youtube clips came, the shifts, the jukes, the footwork....man. The buzz began to grow and just recently one of the world's greatest football clubs (Barcelona) signed Neymar to a deal. We knew that this guy was good, but many hadn't had the chance to see the man play with their own eyes. How good is this guy really?

The 2013 Confederations Cup is giving the world a chance to finally get to know Neymar, those egregiously bright Nike cleats and his egregiously spikey haircut, and that insane game that he has. Mexico faced off vs. Brazil in front of the pro-Brazil crowd, and with one stunning goal with his left foot (his weak foot, by the way) and an amazing split of a double-team (Tony Parker's probably impressed) Neymar is showing the world why he is what that is. (Props to The Original Winger for the video)

Related: My main man Mario Balotelli's playing in the 2013 Confederations Cup too, people hate him apparently.