Watching Nate Robinson play basketball is infectious, even if at times it feels like a train wreck ready to happen. When I watch Nate Rob hoop, I used to be compelled to make all the short man comparisons to his game with other diminutive hoopers like Spud Webb and Muggsy Bogues. However, now that I'm in seven seasons in with Nate, there's only one person he reminds me of. The reigning Sixth Man of the Year, J.R. Smith. Yep, it's J.R., and the reasoning is simple.

There isn't anything on the basketball court that I don't believe Nate Robinson is capable of pulling off. It could be scoring 30 points off the bench in a moment's notice, dunking on someone a foot taller than him or enticing the crowd with gestures that seem more familiar to a wrestler in the WWF. Does Nate sometimes do things that make you want to rip your hair out? Absolutely. But so what? You probably don't have that much hair anyway. 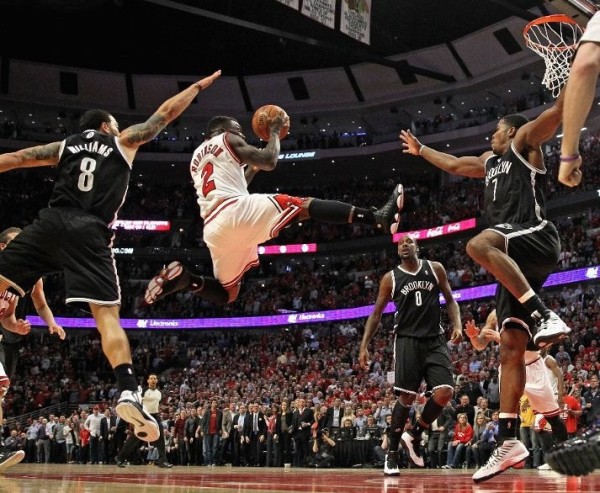 Besides, Nate Robinson is here for the people, and as the people, we're here to love him back.

So when I was watching Game 6 of the NBA Playoffs as the Chicago Bulls and the Brooklyn Nets were squaring off, and I witnessed Nate Rob chucking the deuces to his lunch on the sidelines, I immediately thought JORDAN FLU GAME SON! Nate Rob's gonna bring this home for the Bulls. This is his manifest destiny. Then I saw Nate Rob get iso'd 1-on-1 with the man formerly known as Kris Humphries-Kardashian. Somebody get The Prayer List ready.

One day, a team will realize how important and vital having a player like Robinson on the roster can be. (Hey Oklahoma City, I'm looking at you pimpin.) Nate Robinson's had too many of these moments of greatness when his team needed them the most for folks to continue underappreciating his talents. He is capable of anything and everything, including finding a way into your heart. Why? Because in the words of Kenny Masenda, his heart's in the right place. He wants to win, and that's all I'd ever need to support someone.

2 Replies to “Nate Robinson Pukes And Jukes His Way Into My Heart, Again”