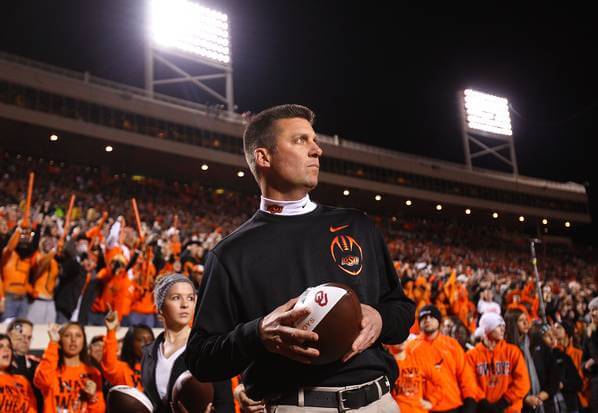 The Oklahoma Sooners and the Oklahoma State Cowboys engaged in the annual collegiate state championship on Saturday morning, also known as Bedlam. Blake Bell, the third QB off the bench for Bob Stoops (and the guy I idiotically once compared to Cam Newton), put together one of the most absurd drives in history to give OU a 33-24 victory in Stillwater. It was a game the Sooners had no business winning, and for Oklahoma State head coach Mike Gundy, it put an ugly mark on an otherwise impressive coaching résumé.

Mike Gundy is now 1-8 vs. Bob Stoops and the Sooners.

I had a few friends hit me up, wondering if this would be the end of Gundy's regime in Stillwater, and immediately I said hell no and please get up off of my phone. However, when given more time to ponder, I had to ask if maybe my comrades had a point. I mean, hell, T. Boone Pickens ain't putting all that oil money into Stillwater for no damn reason, right? The man wants to win. The Cowboys fan base has to be itching for more from Gundy, as three seasons with 10+ wins in the last 4 years feels nice, but having only beaten OU once since I graduated college probably stings worse.

All of this made me think of John Cooper's legacy as the head coach of the Ohio State Buckeyes, where his losses to Michigan were compared to being a "cross he lugs around Columbus." Per the SI Vault in 1997:

He began his head coaching career at Tulsa in 1977 and after five straight Missouri Valley Conference titles jumped to Arizona State in '85. In Cooper's second season in Tempe, the Sun Devils won nine games and then beat Michigan in the Rose Bowl. That triumph over the Big Ten champs did not go unnoticed when Ohio State went in search of a new coach after Bruce was fired following the '87 season. If nothing else, Buckeyes boosters said of Cooper, the guy can beat Michigan. In the nine years since, Cooper has gotten the better of the dreaded Wolverines just once. It is a cross he lugs around Columbus, despite his otherwise irrefutable success. "People come up to me all the time and say, 'So, Coach, are we going to beat Michigan this year?' " says Cooper. "Now what kind of a stupid question is that? No one wants to beat Michigan more than I do. But if you're going to coach football at Ohio State, it's something you have to accept. Michigan means everything to people in Columbus. That's the way it's always been."

National championships are great things to have, especially when you need to prove your team's worth across the country. However, when you're not traveling across the country, you're usually rubbing elbows with your friends and family. In Ohio, it's not uncommon for Ohio State fans to rub elbows with Michigan fans. In Oklahoma, Sooners fans and Cowboys fans do the same. Being unable to brag to the representation of your hated rivals every once in awhile can make a soul weary, even if you succeed in other ways.

I love Mike Gundy. I think he's a hell of a coach who deserves to see this thing out in Stillwater ... but I'm not a die-hard Oklahoma State fan, alum or booster. And if Mike Gundy's head ends up on the chopping block ... well, I won't be surprised.

Here are your morning links for Monday, enjoy.

Ujiri does it again -- Eye On Basketball

Make Your Own Cold-Brewed Tea in a Jar -- Lifehacker

On Marlo Stanfield, A Heartless Takeover & The “Price Of The Brick Goin’ Up….” -- The Smoking Section