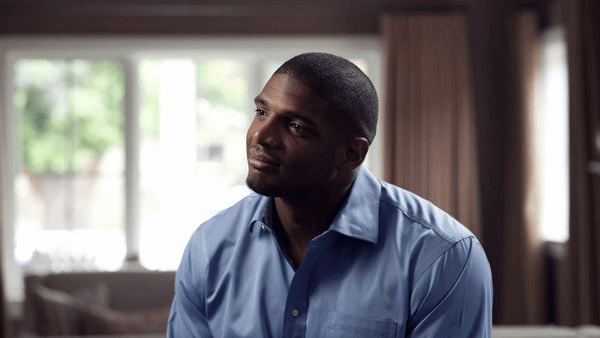 Former First Team All-American defensive end Michael Sam of the Missouri Tigers told the world on Sunday that he is a gay man. (Something that, evidently, plenty of folks already knew.) Coming out of the closet has proven to be one of the more difficult decisions any homosexual person will ever have to face. I applaud the man for overcoming any fears he might've had. To that, I tip my cap to the man.

Yet, when I woke up on Monday morning and the news cycle spun and spun and spun, I wasn't weirded out at all by Sam's announcement. No, I was weirded out that there was so much news to discuss about Sam's coming out.

I admit, I'm a slave to the 24-hour sports news cycle. So when I turned my television on Sunday while doing laundry, I saw the news scrolling down the ticker. BREAKING NEWS: Michael Sam announces that he is gay. That, in itself, wasn't odd. What was odd was that there was a journalist in Columbia, Missouri, chilling out at a sports bar waiting to see the reaction of folks in Missouri's biggest college town to gauge their reaction (which was all cheers). My question is, why are you there, sir?

How was the Worldwide Leader so ready to have panels of former players, coaches and analysts lined up to discuss such specific topics like: How would players react to a gay player in the locker room? How would coaches handle a player who is gay? Would Michael Sam's draft stock be affected?

Then I remembered that our news can be contrived at times.

Michael Sam, a man who probably has already signed with an agent and possibly a publicist, made it known to media circles that he'd be making an announcement soon. ESPN gobbled up this story and packaged it as BREAKING NEWS to the public. This is not a slight towards ESPN, as this is how the media game goes. However, Michael Sam's announcement didn't feel like an announcement. It felt like a production. One that ESPN, major media networks and the blogosphere will be able to leverage into almost a week's worth of news filler for their various shows.

Maybe I wanted a press conference instead. Or just a tweet. I can be transparent here in saying that I LOVED LeBron's Decision, but these two "decisions" aren't in the slightest comparable. Or maybe they are, and I'm just being hypocritical. I have no idea what the "right" way is in this particular situation, but this didn't feel like BREAKING NEWS. This felt like a ticking time bomb that only those in the know knew when the alarm would go off.

As it stands, this is the last time I'll be talking about Michael Sam being gay. Personally, I'm hoping my Jacksonville Jaguars scoop him up in the 3rd-4th round. We could use one of the best defensive ends in college football on our roster, and that's all that matters to me.

Here are your links for Monday.

Like Most People, Kevin Garnett Was A Ruff Ryders Stan In 2000 -- Smoking Section

3 Replies to “Starting Lineups: Did Michael Sam's Announcement Feel A Bit Weird To Anyone Besides Me?”