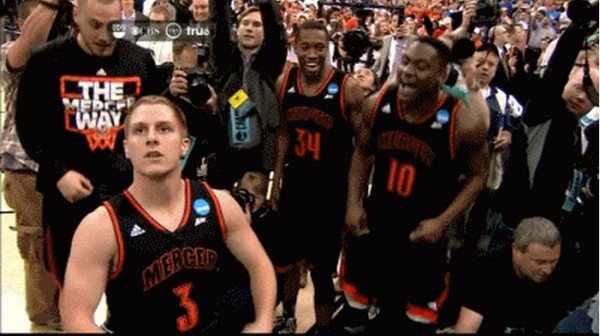 Simply put, there's nothing like seeing Duke get upset by a double-digit seed in the NCAA Tournament.

We've seen it before, as Eric Maynor gave us the glory as VCU shocked the world in 2007 and CJ McCollum repeated the feat as Lehigh shocked the world in 2012. In 2014, we were given another opportunity to witness greatness as the 3-seed Blue Devils were matched up against the 14-seed Mercer Bears. Sure enough, this time our heroes would be Jakob Gollon, Langston Hall and Daniel Coursey as the Bears would paw their way past Duke in a 78-71 victory.

But that's not why we're here.

Kevin Canevari scored zero points and attempted just one shot attempt in this monumental game, but the young man from Charlotte, North Carolina will forever be in America's hearts as he cranked one of the meanest Nae Nae dances the world had ever seen.

Google tells us that the Nae Nae is a simple dance, with a catchy song attached (the perfect elements for an organized dance song). The dance which mainly involves the upper body, has become the newest Hip Hop dance craze. Originated by We Are Toonz, the dance includes a simple four count and the rest is freestyle. Who knows, maybe I'll try and do the Nae Nae tonight when I go out for happy hour, because Duke lost today, and Canevari showed the world what magic can happen when a double-digit seed takes out Duke in the NCAA Tournament. Amen.

Related: Let's Reminisce When Arizona Beat The Snot Outta Duke In The Tournament