Watching a Manny Pacquiao championship fight takes me back to the days of watching the great Felix "Tito" Trinidad back in the day.  You knew when you dropped that fiddy ($50) on the pay-per-view fight that Boricuas from The Island to New York to all places in between would be there to support their country's favorite fighter.  Pacquiao's no different, as the boxer will stride into the ring of whatever Las Vegas hotel on the strip decides to host the big fight.  The Pinoys and Pinays will shower their megastar with the adulation of a King coming home from conquering a war.

Then the fight starts.

While pummeling whomever the opponent is in front of him, you'll notice the clean Nike boots adorned in the colors of the Filipino flag on his feet.  You'll notice the prime-time sponsors that are plastered on the ring floor.  Some could ask the question, is Manny Pacquiao the biggest pitchman in sports?  Our good friend Morgan Campbell got to have an interesting conversation with marketing agent Lucia McKelvy:

Saturday in Las Vegas, Pacquiao will clash with Juan Manuel Marquez for a welterweight title, but the 32-year-old from the Philippines is already boxing’s undisputed champion pitchman, with an endorsement portfolio that rivals stars from major team sports.

And while the question of whether Pacquiao can topple Amercian superstar Floyd “Money” Mayweather has spawned intense debate (and hopefully an actual bout, someday), there’s no doubting who wins the endorsement competition between them.

“Most companies are looking for that brand ambassador who hits a fan base around the world,” says McKelvey, 34.  “Manny Pacquiao hits that fan base like no other.  He’s global.”

It’s impressive given that Pacquiao was virtually unknown to North American sports fans three years ago, and improbable considering the widespread perception that boxing is in a steep decline.

What's more interesting about Manny is that, although the man is a super-duper star, he always finds a way to bring his people along for the ride.

The man was elected to congress in the Philippines in 2010, and hearing him talk, you can quickly realize that he genuinely cares about his people.  You wouldn't join congress for any other reason, especially when you've got Scrooge McDuck dollars, unless you wanted to be a catalyst of change.  That's called using your sway and influence for the greater good of those around you. 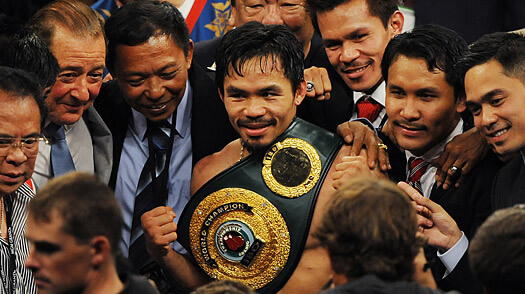 Of course, for those closest around Manny, it's interesting to see how Pacquiao hangs out with his friends compared to how Floyd Mayweather hangs out with his.  It was pointed out on Twitter that Manny will go out and buy a house for his friends to kick it and hang out, so that people can build themselves up while they got work to do with Manny winning another belt.  With Floyd, you see the man invite folks over to his crib and come hang out with him so that Mayweather can be extravagant with his money and show off to the nth degree.  Doesn't make one versus the other right, but it's interesting, nonetheless.

Yes, the man has decided to do movies and sing songs.  That's the type of thing any of us would do if we became superstars and folks put gobs of money in front of us. You want me to play in a movie where I'm the star, get to kill the enemy, and get the fine woman at the end?  Sign me up.  You want me to sing or rap, even though I'm not that good at it, but it'll sell a million copies?  Sign me up.

Why? Because it's fun. Why not do it.

I still don't think that Manny will beat Floyd, but I can't knock the way that Manny goes about living life.  He's the best at his profession, he uses his influence in a great way, and he puts on for the people he cares about.  What more could you ask for?

Juan Manuel Marquez vs. Manny Pacquiao face off for the third time tonight at 9pm.  You all think JuanMa has a chance to vindicate himself? Let us know your thoughts.