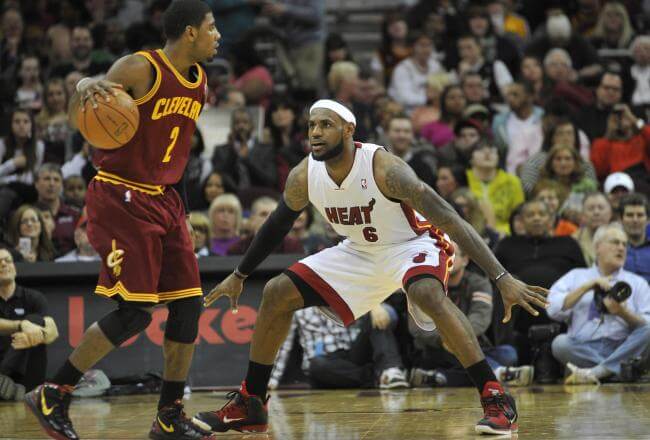 One of the things I'm really looking forward to during the 2013 NBA All-Star Game in Houston is that we'll be able to see Cleveland's formerly favorite son in LeBron James play ball with Cleveland's adopted current favorite son in Kyrie Irving. One plays for the defending NBA champions (LeBron, Heat), and the other is a leading candidate for the No. 1 pick in the Shabazz Muhammad NBA Draft Lottery sweepstakes (Kyrie, Cavs) in 2013.

Now, word on the street is in Cleveland the management (especially the guy who writes in comic sans font) is positioning itself for a move for the Akron Hammer. Per the Akron Beacon Journal's Jason Lloyd, there won't be any free-agent moves coming to Cleveland anytime soon:

Executives and agents around the league are convinced the Cavaliers won’t do anything to jeopardize their ability to sign a free agent to a max contract during the summer of 2014, when LeBron James can again become a free agent. As fans in Northeast Ohio continue to howl and remain divided about the possibility of his return, more and more people around the league believe there is a strong possibility James will indeed return to Cleveland after next season.

The Cavs are well aware of this, too, and won’t take on a bad contract if it compromises their cap space in two years. That means any bad contract they would obtain in a potential trade would have to expire after next season. It doesn’t make a deal impossible, but it dramatically reduces the field — and it decreases the price the Cavs can command since their future obligations would be brief.

Hell, even George Karl thinks that LeBron could be looking forward to a new challenge of sorts:

"I think LeBron is at that stage where he's challenging himself to motivate him to do something that's maybe more difficult," Karl said before Friday's game against Cleveland at the Pepsi Center. "I could see him maybe doing that (returning to the Cavaliers)."

Maybe the 2013 All-Star Game will be a precursor to what could be an epic reunion in Cuyahoga County, and if LeBron James were to decide that Dwyane Wade was too told to keep Miami in championship contention and South Florida was losing its thrill after a number of years, then maybe Cleveland could look to bring The King back to the Cavaliers.

This could be awesome for a variety of reasons:

1. So, will Cleveland fans bring out those old LeBron jerseys again? I imagine those jerseys are burnt into shreds, got cigarette holes in them, smell like piss and other inconceivable things that folks shouldn't do to jerseys. This could become an awesome psychological experiment to witness. Speaking of witness ...

2. We Are All Witnesses, 2.0: I can imagine Nike revving up that old Witness engine and start queuing up Kanye's "Homecoming" music, panning across the skyline of Cleveland, and young Ohioans throwing up the powder again. Samsung could probably come out with the Note 5.0 and shoot all the scenes in Akron, and the LeBron XII would sell for $4,000 or something. This would all probably be awesome.

3. Kyrie, Sideshow Bob and The Akron Hammer: For the longest time with LeBron, there was always the question of would his team be able to get him the proper help to win a title. In Cleveland, players like Larry Hughes, Mo Williams and Shaquille O'Neal were never able to make the magic happen, and after seven years LeBron was officially fed up. The man went to Miami, and in year two he finally got ring #1. If LeBron went to Cleveland for a second Witness tour, the King could easily be playing with the best point guard in the Eastern Conference in Kyrie Irving. LeBron, Kyrie, plus some potential lineup combination of Dion Waiters, Shabazz Muhammad and Sideshow Bob? That's gotta be scary, right?

The 2014-15 season would have Kyrie and Sideshow Bob on team options for the final year of their respective deals, and Waiters and Muhammad* would still be in their rookie deals. A free agent there, a new coach there (sorry Byron) and a 29-going-on-30-year-old LeBron James to lead the way?

Cleveland fans would officially be at The Crossroads with their fandom.

*Cleveland's projecting to get the #2 pick in the 2013 NBA Draft, and folks seem to think that Cody Zeller's going #1. I promise you whoever ends up with the #1 pick is dreading picking Cody Zeller #1, and then they'll talk themselves into taking him, then regretting it immediately.

10 Replies to “LeBron James, Kyrie Irving And The Potential Of The 2014-15 Cleveland Cavaliers”