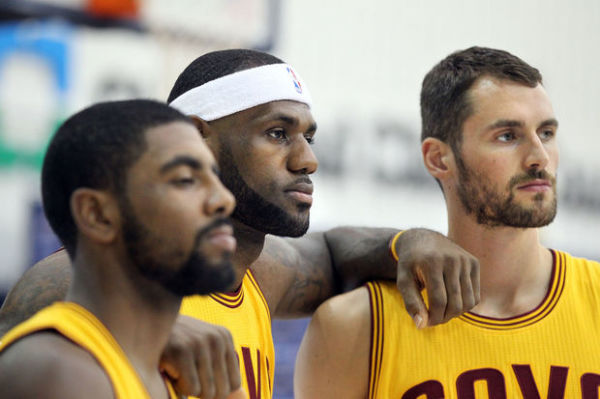 The boys are finally all together.

NBA Media Day was held on Friday, and it served as the first chance we would have to see all of the newest faces in different places as the 2014-15 NBA season is just over one month away. While every team is focusing on what their organization can do to make a title run this season, everyone’s eyes were on that team in northeast Ohio that had their King back on the throne. LeBron James was wearing the wine and gold, posing in the familiar #23 and rocking an egregiously large headband that was covering up a previously artificially made hairline.

Along with LeBron being back in Cleveland, his two new wingmen were also in the fold. Kyrie Irving, fresh off of his gold medal winning (and Shmoney dancing on the medal stand) vacation in Spain and Kevin Love rocking an absurdly awesome #0, have made the new Big Three official for the Cavaliers. For LeBron, having Kyrie and Kevin alongside of him presents a new opportunity to lead a group of young and talented players, and it’s something he’s clearly excited to do.

“I believe I bring leadership qualities that a lot of guys either don’t want or just don’t know how to do it. And I can. I can lead by example, I can lead by voice, I can lead by command and I can lead by just my presence. That’s the most important thing for me. That’s what I’m more excited about than anything.” — LeBron James

Personally, I’m intrigued to see what this team’s going to look like. We know what LeBron, Kyrie and Kevin are capable of individually, but seeing how the trio will mesh will be a fun thing to witness. (Heh.) Moreover, what about Dion Waiters? Sideshow Bob Varejao? How’s that Tristan Thompson contract going to work out? Who in the hell is David Blatt and is he actually a good coach or nah? This is the fun part of the beginning of the NBA season, we have more questions than we know what to do with. Fortunately, the 82-game season will give LeBron and the Cavaliers plenty of time to answer them.

LeBron sat down with FOX Sports to talk about his new role in his second stint in Cleveland, and compared himself to Bill Belichick and Kyrie to Tom Brady* in the process. Belichick and Brady found a way to win three rings in four years, and if LeBron and Kyrie found a way to pull that off, we might be calling LeBron the GOAT.

*Sidenote: If LeBron’s the coach, and Kyrie’s Brady, who in the hell is Kevin Love? Willie McGinest? Ty Law? Lawyer Milloy? So many questions…

by Eddie Maisonet, III time to read: 1 min
Ed The Sports Fan Here’s How We Got To DeMarco Murray Being Th…