The 2012 NBA All-Star Game has came and went. From the pre-game traditional rituals of national anthems (Mary J. Blige is a great entertainer, but her singing skills....yeah) to over-the-top pre-game concert performances from Nikki Minaj and the artist formerly known as Pitbull, it was officially time to get down with the mid-season classic between the Eastern and the Western Conference All-Stars.

Just as Tinsley predicted on this site just two days ago that this game would see over 300 points scored, (301 to be exact) that the point guard Royal Rumble would ensue (which it did, with Chris Paul leading the way with 12 assists, Russell Westbrook going ape in the second quarter and Deron Williams showed everyone that he is still live in New Jersey) and that LeBron James and Kevin Durant would stage a battle of the ages to decide who would win the game. Durant and LeBron both put up 36 points and carried their teams for large stretches of the game. When the game ended, many fans were left asking one simple question...

....was that one of the best All-Star Games we've ever seen? Was this game on par with 1988 and 2001? History always has a tendency to make us reflect on her past, and here are three things to consider as we matriculate to the second half of the season.

Craig Sager asked Chris Paul during the game if he knew if Kobe was gunning for Michael Jordan's all-time scoring record of 262 points. Chris Paul said, "I don't know; I doubt it. I didn't even know about it until you told me." Chris, either you are clueless or Kobe had genuinely been mum on the subject with everyone. Kobe passed The Jordan with a dunk in the third quarter and now has 271 for his career. He entered with 244 and passed Oscar Robertson (246 points) and Kareem Abdul-Jabbar (251) earlier in the game. 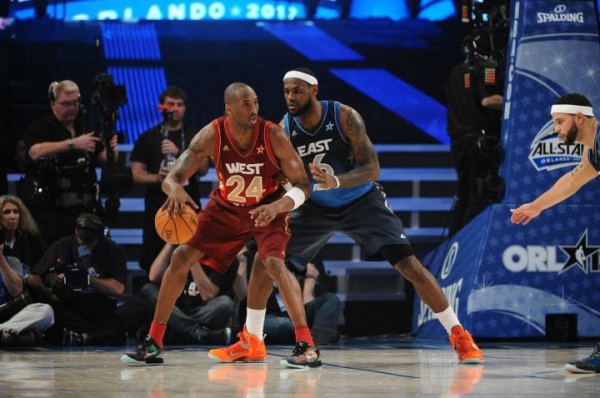 Kobe and The Jordan have now played in 14 All-Star games each, and I truly believe that Kobe realizes and relishes the fact that he has one-upped Jordan in something else. Kobe is an ego-driven, slightly selfish assassin and another small victory like this could fuel his ego even more.

Back in 1988, The Jordan was starting to reach the peak of his superpowers. In the spring of '86, MJ dropped 63 on a legendary Celtics squad; in '87, MJ put up a scoring average of 37.1 (5th-highest in NBA history); and in '88, the All-Star game came to his home arena in Chi-town. Not only did MJ have to battle for the lead dog role on his own team with another superstar in Dominique Wilkins (29/5/4), but he also had to overthrow the league's preeminent superstar in Magic Johnson (17/19/6) in the process. MJ took another step in becoming The Jordan, as his 40 points and eight rebounds have become the modern day standard and the MVP was as surely his as Follow The Leader was an all-time hip hop classic.

Durant's journey to the MVP throne was quite similar. Durant's impressive stat line of 36 points and seven rebounds was challenged by the newly minted all-time all-star scoring leader in Kobe Bryant's 27 points. Moreover, the all-world do-everything player on the opposing team put on a masterful performance, as LeBron James' line of 36/7/6 quite possibly trumped KD's. Of course, KD's team won and LeBron's didn't, which brings us to this...

LeBron James Did Everything Right, But Was Still Wrong

Let me be perfectly clear about this. As much as I respect and appreciate my favorite player Kevin Durant (Russie is who I Stan the heaviest for, but KD's always been my favorite player since he touched down in OKC) for putting in yeoman's work on Sunday night, the MVP award should've been lifted above the head of LeBron James. Not only did Bron put up that ridiculous 36/7/6 line, but he scored 22 of his 36 in the second half after his East squad was getting their teeth kicked in. The comeback hinged on what LeBron could do, and LeBron started performing like Magic Johnson did 20 years prior. Insane three-pointers, precise passing and heady drives to the rim were all in the arsenal for LeBron on Sunday, and with everything hanging in the balance, the game was Bron's to win.

Give the East squad credit for running an actual play and executing almost flawlessly. LeBron working as facilitator on the play freed up Deron Williams on a down screen and LBJ hit him in stride for a wide-open three. That three came up short, and a mad dash for the ball ensued. After the ball bounced around, LeBron got the ball about 30 feet from the rim and was double-covered. Instead of elevating for an insanely difficult shot, Bron tried to fire an insanely difficult pass to Carmelo Anthony that was intercepted on the other side of the court.

The one person who wanted LeBron to shoot? Kobe.

LeBron confirms that Kobe was telling him to shoot the ball in those key stages that led to late turnover.

The slander and ridicule was immediately slung at the feet of LeBron and, deserved or not, it served as another moment in time where James didn't "step up." LeBron knew it, too; the man looked sick to his stomach and honestly looked as despondent after this loss versus the Heat's loss to Dallas in the Finals a year ago.

One day we might look back this day as a learning experience for LeBron as he figured out in his own way to win "the big one," or maybe we'll look at this day and use it as proof to someone that "never could." Either way, LeBron, at least, deserved the MVP, and that's all that really matters in what was just an exhibition game.

Here are some photos, courtesy of the NBA, of Sunday night's All-Star extravaganza. We look forward to hearing your thoughts on the game in the comments section below. Enjoy.