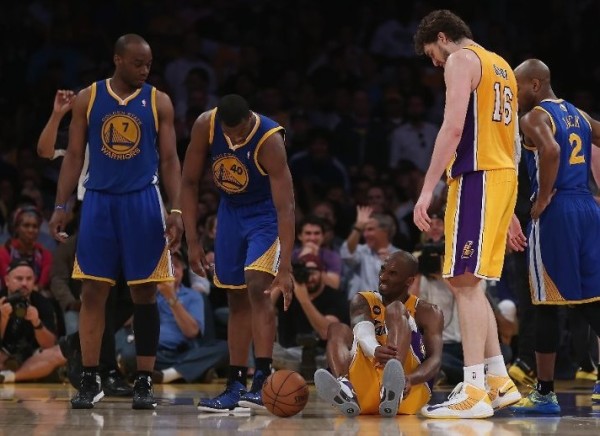 I'm not a Los Angeles Lakers fan, but the trials and tribulations that Showtime has had to go through this season has been simply unfathomable. The death blow to the Lakers may have officially come late in the 4th quarter versus the Golden State Warriors, in a basketball play that Kobe Bryant's probably made 1000's of times prior, No. 24's achilles said "no mas."

The Lakers believe Kobe Bryant tore his Achilles. He will have an MRI tomorrow to confirm.

I couldn't imagine seeing a player I've looked up to, watching him for over half of my time on this Earth, laying there in a crumpled heap after playing 80 of the best games of his entire career. In a snap, that person's immortality is gone by the wayside and all you're left to ask is....why?

More news will trickle out over the course of the weekend, but the inevitable finality of this news seems right on the horizon. The buzz has already begun asking the question, "is this the end of Kobe Bryant?" In reality, its something to think about another day, but I doubt that a man as stubborn and hard-headed as Kobe would ever let himself go out that way.

As for the right now and the immediate future, I would encourage even those that despise Kobe Bryant or the Lakers to bite their tongue on this one. Some of you won't, and you could end up getting punched in the face. Hell, I feel terrible right now, and I hate the man.

That's how good Kobe Bean Bryant is, and that's how much I respect him.