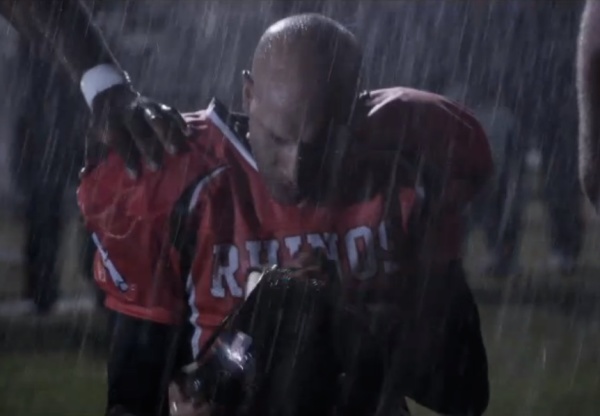 I've had one concussion in my life. I was 11 years old, playing first base on my 6th-grade elementary school baseball team, the Crosby Park Longhorns. Back in 1994, being a first baseman and an Atlanta Braves fan meant that my role model for playing the position was Fred McGriff a.k.a. The Crime Dog. I wore #27 in honor of Crime Dog, and I wore my wristbands above my batting gloves just like him. (I also wanted the pop-up shades like he had, but my mama wasn't about paying $85 for some shades.) Fred McGriff would be proud watching a chubby 11-year-old trying to be like him on the baseball field. (So would Tom Emanski.)

However, the shortstop on our team, Brandon, had a cannon of an arm. His arm was so strong that he'd eventually go play minor league baseball as a pitcher. No one enjoyed catching balls thrown by him, me included. As a first baseman, you're taught to attack the ball and stretch for it, instead of letting the ball come to you. Yet, on one fateful day versus Woodland Hills Elementary, a two-hopper got past the third baseman, but Brandon was able to reach it. Then Brandon decided he was going to throw the ball as hard as he possibly could in my general vicinity.

I can remember hearing the sound of the ball whipping against the wind. fssst-fssst-fssst. I put my glove up to catch the ball, but I was too late. The ball skimmed over the top of my glove. Then the lights went out.

I don't ever remember hitting the ground. I don't remember my retired Army veteran of a baseball coach chucking while putting smelling salts under my nose. (I only know this because my mama cussed him out for chuckling while my lights were out.) I don't even remember Brandon apologizing profusely for hitting me on the top of the head.

The point is, I don't know what I did or what happened around me for the next 45 minutes after that baseball game. I do remember my mom taking me to McDonald's after the game, because hey, that's what mamas do for their sons after the game — especially when their son gets hit in the dome and is told to keep an icepack on his head until further notice. I also remember my mama telling me she didn't want me to play baseball anymore, then changing her mind and then talking with the coach to make sure he coached me up into being a better player. (Thanks, Coach Ellis.)

Anyway, this is a dope sketch by Key & Peele on concussions. Because seriously, after I got hit in the head by that baseball, all I would've said was the following: "What are we doing out there? Because I don't know. No, seriously? I don't know."