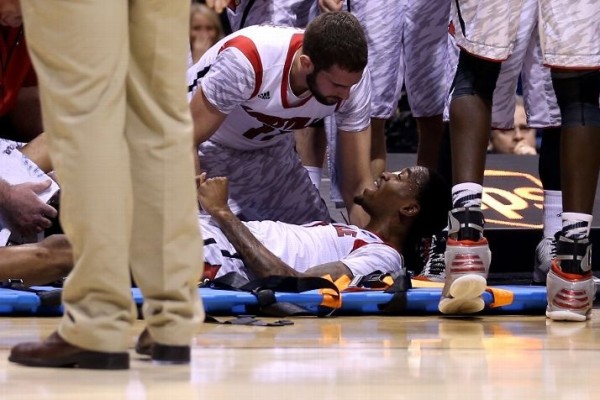 You can just say the name of the athlete and everyone knows exactly what you're talking about.

I won't bother linking you to the clips of these injuries. You know how to use the Google/YouTube machine. It's those skin-crawling moments that you always hate to see, and unfortunately in sports these moments are unavoidable. After Sunday afternoon, we can officially add Kevin Ware of the Louisville Cardinals to the list .

If you have no idea what I'm referring to, then I'll assume your Easter service at church ran extremely long and your Sunday late lunch/dinner left you in a food coma from eating one too many slices of honey-baked ham and sweet potato pie. The Louisville Cardinals guard Kevin Ware suffered a gruesome compound fracture of his leg in the first half vs. Duke. Again, I'm not going to link you to it, but just type "Kevin Ware Broken Leg" into the Google machine and you'll see it for yourself.

In the back of your mind you know that these things could possibly happen, but you never expect them to occur until they actually do. It's one of the worst things to see ever.

What will be transcendent (if that's actually possible, given the situation) in regards to Ware's leg break is what transpired following the horrific injury. While Louisville's star players Peyton Siva, Chane Behanan and Russ Smith are immediately reacting to Ware's physical breakdown by gasping, crying and yelling out in horror ... Kevin Ware turned into a focused human being while being certifiably insane.

Dog ... what? Do you realize that your leg looks like a table after Edge speared Mick Foley that just so happened to be on fire? Somehow you have the mental focus to assess that fact that you'll be fine after this, and you want to encourage your boys to win the damned game? Dog ... what? I think I've watched my fair share of sports movies, and when a player gets hurt and the team has to rally to overcome its opponent, the injured player usually says something inspiring to get his teammates over the hump.  The scene from Mighty Ducks when Adam Banks scores against his Hawks, then suffers a concussion, then proceeds to tell Jesse Hall to "kick some Hawk butt, cake eater."

At that point, there was no way in Hades the Ducks were gonna lose that damn match. TRIPLE DEKE ON YO ASS HAWKS GET SOME!!!! And yes, for the movies, that's pretty awesome. Inspire folks that even when you see 17 fingers held up by the trainer due to your concussion, always remember the mission at hand. Kick some Hawk butt.

Or some Blue Devil butt.

What followed Ware's snap of the leg was some of the finest collegiate basketball I've witnessed all year. Siva, Smith and Behanan played like men possessed. At halftime the Cardinals were up 35-32 on the Blue Devils, and Duke looked more shell-shocked by what transpired earlier than Louisville. Fast breaks here, three-pointers there ... lockdown defense to the left of them, head-scratching mistakes to the right of them. That 22-point ass-whooping propelled Rick Pitino's Cardinals to their 10th Final Four in school history and a made-for-TV scene had taken place in front of our very eyes in Lucas Oil Stadium in Indianapolis.

All because of Kevin Ware's insanely genius words* that came out following his leg snapping into two?

*Obviously I've seen gruesome injuries on television before, but the most gruesome injury I've ever seen in person actually took place in a rec-league kickball co-ed league to my boy Isiah. While playing left field, the opposing team kicked a line drive to the outfield and Isiah slid to catch the ball. The man was successful, but his foot was not as his foot was now turned to the opposite direction. Yes, toes pointing the wrong way and all. What was crazy was that after screaming from the initial pain, he yelled to us to go get his phone. He immediately called his brother to tell his parents what happened, and while we waited for the ambulance to come, he did one of the greatest things I've ever seen. He took his cell phone out, snapped pictures of his mangled foot, and sent the picture out to his friends. In shock, I say, "Dog, what the hell are you doing?" His response? "Man, the homies back at the crib ain't gonna believe this. Let me take these photos real quick and let 'em know I'm gonna be aight. Besides, I caught the ball, right?" Yes you did, sir, yes you did.

6 Replies to “Kevin Ware, Catastrophic Injuries And Being Certifiably Insane While In Shock”