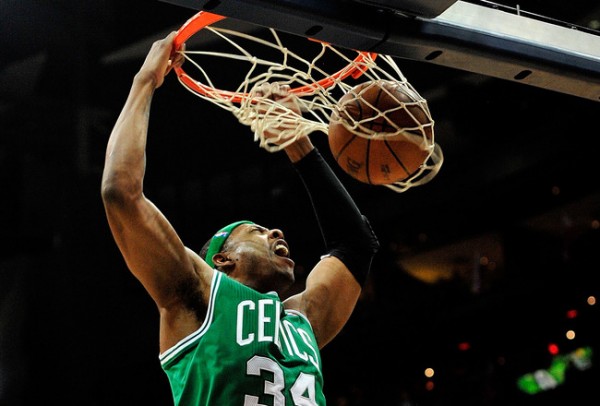 Paul Pierce dunked on the Philadelphia 76ers, twice. In the same game. Actually, in the span of five minutes.

Kevin Garnett was calling for the ball, in the post, on numerous occasions. Shaming whoever had the gall and audacity to try and guard him.

*cues Prince's 1999 anthem and sings aloud for a few minutes*

The Celtics 107-91 thrashing of the Sixers on Wednesday night was downright scary. Kevin Garnett looked like the primetime performer of his past back in Minneapolis and Paul Pierce looked like he was usurping the power away from Antoine Walker's shimmy. 51 points, 25 rebounds and 19 free throw attempts in just over 3 quarters of action later from Kevin Garnett and Paul Pierce, the Sixers were already thinking about Game 4.

I would make some ridiculous prognostication about the future of the Celtics in the playoffs, but I'm going to pass. I'll leave that to you all in the comments. I'm just going to enjoy seeing Pierce try to yam on everyone at the rim and Garnett pounding his chest and screaming at folks while beasting in the lane.

Here is your pertinent reading material for this fine Thursday. Enjoy.

Chan-Lo: Make-A-Wish & Mac Miller Team Up To Fulfill A Dream

The Smoking Section: Adult Swim Confirms Return Of “The Boondocks”

Jason Whitlock: How to make football worth risk

KSK: Step Right Up And Buy The Shambles Of LT’s Life

Lifehacker: How to Hide Your Tweets from Google

No Guts, No Glory: Agent says Greg Oden wants to play for the Miami Heat

SB Nation: How To Create Your Own James Harden In 3 Easy Steps

Gregg Doyel: Team USA will win gold (again) with Coach K, not much without him

One Reply to “Starting Lineups: Kevin Garnett and Paul Pierce Must Think It's 1999”