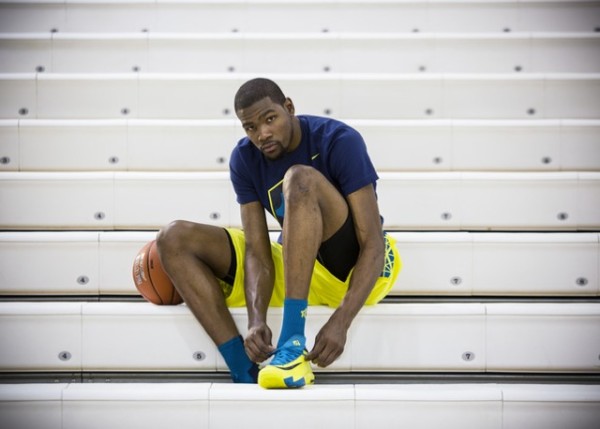 I read a lot of stuff on the internet, and I figured I'd stop being selfish and share it with the people. Here are the dopest articles I actually read this week, enjoy.

The Smoking Section - Why Nike Basketball Should Make Kevin Durant The Third MVPuppet: The new addition is a no brainer. A Kevin Durant puppet must be brought into the mix. During the original advertising reign, Durant was still an on-the-cusp star whose signature shoe line fell far behind the popularity of Kobe Bean and LeBron Raymone’s. Fast forward four years later and Durant is undoubtedly…A. A top-two player on the planet. B. One of the “big three” shoe salesmen along with James and Bryant. C. A growing celebrity away from the court damn-near five million followers deep on Twitter (compared to 9.4M for Bron and 3.2M for Kobe because, yes, social media presence is a huge factor in marketability nowadays). D. A nice guy who would have no problem moving in with Puppet Kobe and Puppet Bron because rent has gone up nationwide and having a third person helping split bills only makes sense.

Grantland - We Went There: The Jaguars and Ravens Show Why They Are Who They Are in Training Camp: The physical atmosphere of the camps were as different as could be. The Jaguars practiced under the boiling Florida sun in the morning, finishing up just after noon. The Jags run their camp on the practice field that's adjacent to their stadium's parking lot, so there was no respite from the heat. The air was overrun with enormous dragonflies, buzzing perpetually just out of smack's reach, in what I was told was an infrequent occurrence. They played "Paper Planes" over the PA, which seemed like a really bizarre juxtaposition of song content with, you know, a football practice. The team had just drawn 19,000 fans to a weekend practice with a fireworks show as a finale, but the Monday session I saw marked the beginning of closed practices and a small crowd of player families and folks in the know. That (perhaps not coincidentally) meant a lot of Denard Robinson, who looked great in a variety of different roles.

SFist - An Interview With Craigslist's Notorious Google Glass Hater: Two things. One, it's a fucking hyper-expensive toy for idiot children. There are many worthwhile potential applications of Google Glass as it's likely to exist in the future—surgery, fetish porn, monitoring law enforcement—but the incremental value for a regular consumer is nil. It’s just a stupid toy for people who have too much money and who apparently want to skyrocket to the “America’s Most Muggable” list. I mean, I saw that prick wearing Glass at the Run The Jewels show—and Run The Jewels is fucking rap group named after a slang term for robbing people. All of their songs are about crime. Jesus, dude. Awful tone detection. And did you hear about that guy who walked into a big-ass glass pane because he was watching YouTube on his Glass? This. This is the fucking doofus userbase of Google Glass. Fuck them. [Ed. note: Sources say this is an urban legend.]

Decatur Herald-Review - What Happened To Halle Berry's Career?: In 2002, Halle Berry won the Academy Award for Best Actress for the film “Monster’s Ball,” becoming the first and only black actress to date to win the award for a leading role. During her famous, tearful acceptance speech, she said “This moment is for every nameless, faceless woman of color who now has a chance because tonight this door has been opened.” Her pronouncement hasn't quite proven true as of yet for other actors and actresses in leading roles, but even more notably, it hasn't proven true for herself. For an actress who was once on top of the world and among the most highly paid female performers anywhere, the last decade can’t be considered anything but a cinematic mess.

Kotaku - The Grim Reality Of Grand Theft Auto Online: GTA Online sounds pretty freakin' great, right? There's so much stuff to do, and a lot of it is nonviolent...OR IS IT?

Got anything worthwhile that I missed? Feel free to send me a submission at ed AT edthesportsfan DOT com.

One Reply to “Your Required Weekend Reading: Because Kevin Durant Should Be The 3rd Nike MVP Puppet”