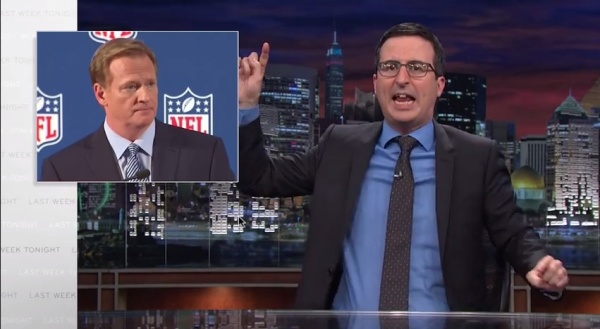 Late Friday afternoon, the National Football League put its No. 1 employee on the depth chart in front of the world for 45 minutes to try and explain all of the shenanigans and tomfoolery that's taken place in the last month or so. That employee was commissioner Roger Goodell, and what he stood up there and said was a bunch of gobbledegook.

I didn't even watch the press conference as I was too busy working my 9-to-5 job trying to make ends meet. While doing so, I kept my eyes on Twitter a bit and even got a few emails/gchats about what was happening. Everyone was either fed up with the commissioner or just laughing at the fact that this man makes $44 million annually and is sitting up there at a podium wasting everyone's time.

Leave it to John Oliver, host of the popular late-night HBO show Last Week Tonight with John Oliver, to succinctly recap the shucking and jiving of Goodell in less than three minutes time. If there are kids in the audience, there's a few cuss words and middle fingers in the video clip below so ask for your parents' permission before watching, even though we know you won't. Enjoy.

Related: VIDEO - The NFL Chick Speaks Out On Ray Rice And Roger Goodell On Fox Business