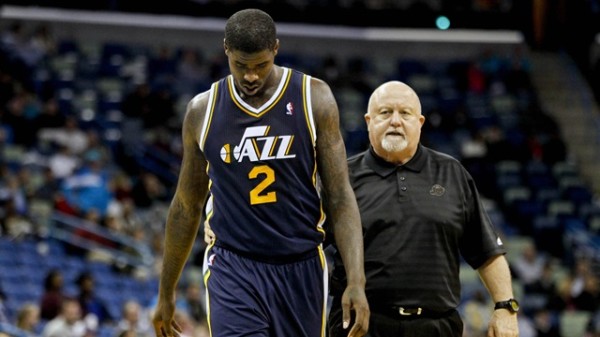 Ed’s Note: There are times when dunks, crossovers, insane tackles and other things that can cause extreme embarrassment to players and raucous laughter amongst the consumers of live sports, yet don’t meet the (singular, as in mine, and mine only) criteria of what should be an obituary post. Therefore, I created The Prayer List, for those that have survived a traumatic event, but still need our prayers and well wishes, then we can grieve for them here. Let's just hope that these folks are not forever sick and shut in. Enjoy.

I really want you to think for a second. When was the last time you had a real, positive thought about Marvin Williams. Oh wait, I realize now that some of you youngins might not have any idea who Marvin Williams is. And really, why would you? This man have been a relative afterthought for over 8 years now, as his days as a gangly and talented freshman phenom at Chapel Hill feels like eons ago. Marvin Williams as the 6th man on that 2005 North Carolina Tar Heels national championship team, and his FLASHES of brilliance somehow got him drafted #2 overall in the 2005 NBA Draft by the Atlanta Hawks.

The same Atlanta Hawks who already had a combo forward on the squad in Josh Smith.

The same Atlanta Hawks who desperately needed a point guard.

The same Atlanta Hawks that decided to take Marvin Williams ahead of Chris Paul and Deron Williams.

Ever since that day, we've never thought of Marvin Williams in a positive light and for that, he's begun to get sick....on the inside. His light, once shined so bright, that somehow he was consistently forgotten while being a member of the Hawks. Then one day, someone I know was like, "Hey....who is this big dude named Williams on the Jazz?" I replied, "Bruh, there's no big dude on the Jazz named Williams. There's only Month Williams on that squad." He replied, "Oh, so you're saying I don't know who Month Williams is? Bruh, there's another dude on the team named Williams, but I have no idea who it was."

Marvin's done all he could to eradicate this sickness of his out of his body, and he even tried a risky maneuver, to cleanse his soul in front of millions and millions of people. J.J. Hickson, you are an evil person sir. Pure evil.

Marvin's family contacted us and asked us to have the people pray for his well being. They also encouraged us to try to find some positive things to highlight in Marvin's career. I told them I would not make any promises, but I'd try.

I came up with three things.

1. At one point, Marvin Williams soared above Dwight Howard and Joakim Noah. Props to SLAM Magazine.

3. Marvin Williams has made $55 million thus far in contracts in the NBA. Yep, shocked me too.

One Reply to “The Prayer List: The Only Way Marvin Williams Can Be Relevant These Days Is By Getting Dunked On By JJ Hickson”