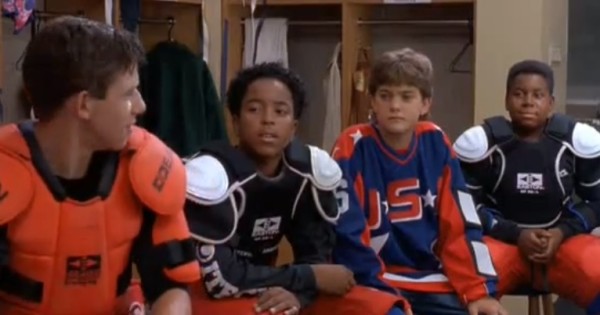 At some nondescript hour of the night, I caught the last 45 minutes of The Mighty Ducks on television. Usually when some nondescript movie comes on while I'm about to fade to black, I just pass out for the evening. Yet, this was The Mighty Ducks, and there was absolutely no chance I was going to turn the channel on one of the greatest movies of all-time. No way in hell.

When The Mighty Ducks came out in 1992, I was about to turn 9 years old. By this time I had become fully invested in sports as a child and was just getting introduced to hockey. Sure, I was familiar with players like Mario Lemeieux, Wayne Gretzky and Mark Messier, but an aficionado I wasn't.

Yet and still, I was captivated by the movie. I remember going to see it in the theaters with mom and her date. I really hated that dude, so I made sure that I begged my mama for the big bucket of popcorn, the biggest soda and even some candy for good measure. If you're gonna try and get at my mama, I'm about to hit your pockets in the process. Did I mention that I was a devious 9-year-old?

Anyway, the movie itself had a cast of young, no-name characters who over the course of three Mighty Ducks movies we would come to grow and love. What I didn't realize is that there would be one person in particular that would win me over and that I'd always root for egregiously like the movie was real life, and I would act like I didn't know what the final conclusion would be in a film I've seen as many times as the number on Adam Banks' sweater.

See, while Banksie was by far the most talented player on the Ducks (after he showed us what a Cuban-like defection looked like by leaving the Hawks), he did nothing for me personally. Charlie Conway was a lot like me. He was the captain of the squad and the only child of a single mother as well, but nah, he did nothing for 9-year-old me. Greg Goldberg looked kinda like me, as his mom probably shopped for the "husky" jeans at the store, and he even had that beige-like skin like me. Plus, Goldberg was all about the Philadelphia Flyers, the squad who would eventually be the team that I would root for kinda like a die-hard. Alas, Goldberg wasn't the draw for me either.

The player that drew me in was Jesse Hall, No. 9. The shit-talking, cantankerous winger with the absurd hair and a wardrobe colored in the African heritage of red, green and yellow was THE guy for me. I loved Jesse Hall and would defend his honor to the death if I had to. (Although, now that I watch Mighty Ducks as a grown-up, where in hades were Hall's parents? Good grief, ole buddy's hair was beyond out of control. My mom would throw a fit if my hair looked like his.)

Admittedly, at age 9, the blackness of Jesse Hall had a profound impact on my senses. I resonated with Jesse more than any other character because unlike Conway or Goldberg, whom I easily was most comparable to, Jesse was what I aspired to be. For me, Jesse Hall was the precursor of other favorite players that I would enjoy later in life, like Gary Payton, Reggie Miller and Chad Johnson.

I can vividly remember being upset that Hall wasn't in the abomination of a movie that is Mighty Ducks 3, even though if that movie came on right now you might as well cancel my plans for the next 90+ minutes. EFF YOU EDEN HALL ACADEMY! I remember thinking that maybe I'd be a future hockey player myself, even though I was born and raised in Oklahoma … so yeah, no.

Calling your friend a cake-eater was unchartered territory prior to 1992, but after that movie came out and depending who you said it to, calling someone a cake-eater would either make someone smile or it'd be a death sentence out in the streets. This was all because of Jesse Hall, the realest Mighty Duck of them all, even if he never saw a comb or an afro-pick to save his life.