When they put your name next to college football royalty like Rashaun Woods, Dez Bryant and Justin Blackmon, the possibility of being the best wide receiver in college football is right at your doorstep.

However, when James Washington steps onto the field of T. Boone Pickens Stadium for the Oklahoma State Cowboys, all he cares about is winning games and staying humble. Per the Tulsa World’s Mark Cooper:

“You ask any wide receiver in the Big 12, he would say he was,” Washington answered when asked if he was the best wideout in the conference. “I would say I would be, but I don’t really look at it. I just try to get my team better, that’s all.”

Washington’s ability to make his team better is evident as soon as he steps onto the field. The corners never take their eyes off of No. 28. The safeties inch a little closer before the snap. The opposing team’s coaches go into a frenzy whenever No. 28 goes into motion. Washington is Geppetto, manipulating the defense like a marionette with his highlight reel on repeat in the back of everyone’s mind.

Washington gained notice on every wide receiver’s favorite preseason watch list, the Biletnikoff Award, to which he was named after finishing as a second-team All-Big-12 selection last season with 1,087 yards receiving and 10 touchdowns. The three wide receivers who finished on the first-team All-Big 12, Corey Coleman, Sterling Shepard and Josh Doctson? Yep, they were all selected within the first 40 picks of the 2016 NFL Draft. With Mason Rudolph fresh off his second Manning Passing Academy session locked in at quarterback, the duo could end up as college football’s most dynamic pitch and catch unit of 2016.

But back to Washington’s place next to these Oklahoma State legends.

As someone who grew up in Oklahoma watching all of the college football, seeing the Cowboys consistently churn out some of the best wide receivers has always felt like a miracle.

Bryant is the only receiver I can think of that reminded me of what Larry Fitzgerald was like at Pitt, as no one attacks the ball like Dez did.

Blackmon was unguardable in college and could catch anything — and if his personal issues never got in the way, he’d be a Pro Bowler right now.

But Woods — man, he was the first. He was the best route runner, the most instinctive, and the best wideout Oklahoma State’s ever had since the days of Hart Lee Dykes. Watching Washington play on the outside reminds me the most of Woods, as he consistently does one thing on the field that blows me away. Even Mike Gundy agrees with the assessment.

“Dez is just a fanatical catcher and athlete. He’s just a freak when it comes to what he does. Blackmon turned himself into a workaholic with tremendous competitive ball skills and a willingess to say, ‘I’m gonna score. Forget it. Rashaun was a technician and a great route runner, a lot like James.”

He might be the next Rashaun, Dez or Justin…but in reality, he’s James Washington, and he’s got next as he’s poised to be college football’s next great playmaker that we all fall in love with. 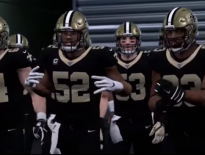