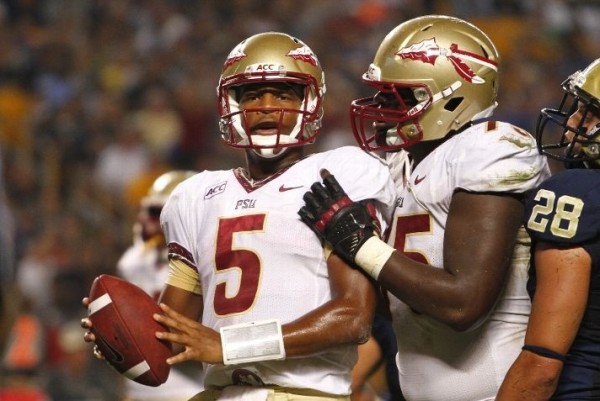 I know way too many Florida State Seminoles fans. It's really a shame too, because I don't go in on them about the time they only scored TWO POINTS in the 2001 Orange Bowl versus my Oklahoma Sooners because Josh Heupel is a GAWD and Snoop Minnis was ineligible and would've made no difference whatsoever in the game's outcome. (Cry those thug tears Flawda State fans!) As it were, because I am cool with so many fans of the Seminoles, I have to deal with tweets, texts, gchats and calls from FSU fans like Keith, Tins, Garfield, Nunley and JG. Man I can't stand these people when football season begins.

However, there was this name that they kept bringing up. Some young buck quarterback from Hueytown, Alabama. They'd brought the name up for a solid 18 months, and for the longest time I kept getting the name wrong. James? Jameson? Jae Millz? (Random: I'm convinced the more unorthodox you name your child, the more likely said child will be 6'8", be able to throw a 20-yard out-route from the far hash, be able to crush hanging curveballs 450 feet and/or get caught in a drug bust while playing Madden in a music video. I'll take my chances.) Anyway, the young man in question is Jameis Winston, and the Famous Jameis Winston era has officially begun in Tallahassee.

The Pitt Panthers fooled us all on Monday night, as the skies began a torrential downpour on Heinz Field and the team formerly known as Larry Fitzgerald and the Panthers went down the field with relative ease and scored a touchdown within a few minutes. 7-0 Pitt. No biggie, let's see what Jameis is talking about. Five plays later, Florida State was punting and upset alert seems to be on the horizon....

...then Jameis decided to show the world why is he what that is.

Winston ended up going 25-of-27 for 356 yards, with five total touchdowns and no interceptions. He set the Florida State record for most passing yards by a freshman in his first start. Yeah, if you're paying attention at home, the man had THREE more touchdowns than he did incompletions. The crazy thing is, I'm pretty sure the two incompletions were both catches because they were caught on the sideline. Yeah whatever, I guess the guy can't be perfect like other QBs. Send him to the third round of the 2015 NFL Draft.

Seriously though, the next couple of years will be fun at Florida State. Jameis Winston can ball, and although there will be some bumps along the way, there hasn't been a quarterback that exuded this much confidence along with packing as much natural talent that Winston has since the days of Charlie Ward. Let's just hope we keep Winston playing football in the future, no matter how good he may be in baseball. (He's really really good in baseball.)

The Starting Lineups are back, and here's your required reading of the day.

Can The NFL Face Its Demons? - The Wall Street Journal

Hater Of The Year: Woman Calls Cops On Drug Dealer Because His Prices Are Too High - Day & A Dream

Is There A Possible “He Got Game” Sequel In The Works? - Dime Magazine

KFC Has Figured Out How To Deep-Fry Soup - Food Beast

Dickerson braces for another assault on his record - Pro Football Talk

When OutKast Took Over ‘Yo! MTV Raps’ To Promote ‘ATLiens’ - The Smoking Section

Why Can’t You Wear White After Labor Day? - Mental Floss