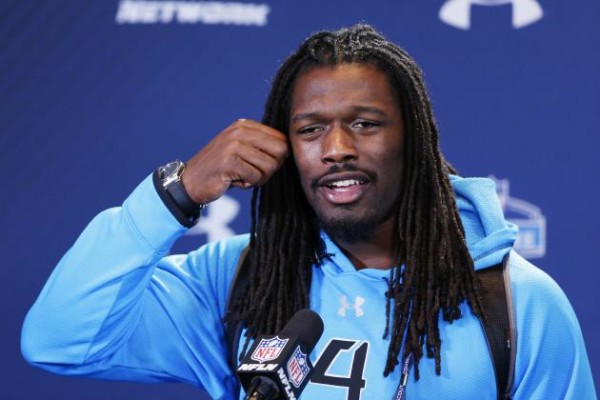 For Jadeveon Clowney, this was a means to an end.

The 2014 NFL Scouting Combine has been in full force in Indianapolis over the weekend, and while hundreds of elite pro football prospects put their bodies and souls under the microscope, the former defensive end from South Carolina knew that this was the day he'd been waiting on for two years. Per SI's Ben Eagle, Clowney put on a show in Lucas Oil Stadium:

Jadeveon Clowney guaranteed that he would run a 4.4-second 40 time in Indianapolis. He fell short of that figure, but it was still pretty impressive. The South Carolina defensive end logged an unofficial 4.47 in his first attempt Monday morning at the scouting combine, faster than Johnny Manziel and a time that would have made him the sixth-fastest running back at the combine. Clowney’s second run logged in at 4.48. Kent State running back Dri Archer has logged the fastest 40 time at the combine thus far with a 4.26, shy of Chris Johnson’s combine record of 4.24.

ONE: Humans that big and that strong aren't supposed to run a 4.47 in the 40-yard dash.
TWO: The five-year average for wide receivers running the 40-yard dash is HIGHER than Clowney's time.
THREE: Global warming is real. I'm pretty sure this has nothing to do with anything, but yeah.

Now look, I know that 40-yard dash times don't really mean much in the grand scheme of things (outside of the fact that the man could probably win a gold medal for the USA bobsled team if he wanted too), but I can't help but reflect on his junior year while serving as a member of the South Carolina Gamecocks football team. In 2012, the then ballyhooed former high school All-America burst on the scene as a sophomore and showed the world that he could be next at the defensive end position. Sacking the quarterback like crazy and decapitating dreadlocked running back's heads was Clowney's life, and many speculated that he'd be No. 1 pick in the 2013 NFL Draft. Of course, that's not how things work in the National Football League.

We know the rules of the NFL. Players must be three years removed from high school before being eligible for the NFL Draft. That meant that Clowney would have to return. Clowney, whose goal was always to make it to the league, now has a dream deferred. So what did he do? He basically treated his junior season like many college students spend their fifth year in school. You know those fifth-year seniors I mean — most of the ones I knew were pretty close to graduating, as their final class requirements were few and their free time was aplenty. Parties were to be organized, chicanery was to ensue (like those speeding tickets) and living the life as the Big Man On Campus was what was to be done. Sure, being lackadaisical and aloof was to be expected, even if the pundits and prognosticators began questioning his work ethic. This only proved one thing.

A missed call from Suns front office had a breathless P.J. Tucker fearing he had been traded -- No Guts, No Glory

10 Things Scrabble Has Taught Me About Life -- Thought Catalog

Google Adds an "Unsubscribe" Button Right to Your Inbox -- Lifehacker

The Road Not Taken -- Grantland

5 Replies to “Starting Lineups: With Jadeveon Clowney's 4.47 40-Yard Dash, His Run As The Modern-Day Van Wilder Is Over”