"A hit dog will holler” is an old proverb that has been popular in the southern United States. It means that a person who is offended by something someone has done will tell that person. Per BarryPopik.com, The saying was coined by Alabama-born alcoholic-turned-Methodist-evangelist Samuel Porter Jones.

Subtlety can be a piercing sword through someone's heart.

In a world where actions are as premeditated and contrived as ever, Derrick Rose walked onto the basketball court inside the United Center and prepared for warmups like any other game. The Chicago Bulls and the Golden State Warriors were fighting for primetime supremacy on a Saturday night where college football's playoff fate was being determined before our very eyes. Yet, with one veiled swoop, D-Rose stole our collective attention with one black t-shirt with three words on it. 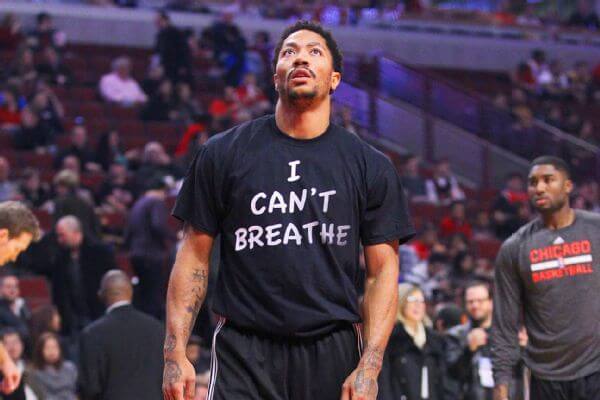 This article isn't about determining who is right or wrong in the case of Eric Garner, or Michael Brown, or Oscar Grant or anyone else who's been afflicted harshly by a municipality's police department. No, this is only about a man on a pedestal letting the world know that he has empathy for grieving group of people. For many, seeing Rose don the black tee was awesome, as having a superstar actually take a stand these days is refreshing to many. For others, well...a hit dog will holler.

Sigh. RT @dan_bernstein: Good for DRose. I just hope he understands the position he's taken, and what comes with it. Alas, I doubt he does.

.@drose just put himself, The #Bulls and @adidas squarely on a side of a third-rail issue. It's huge.

Seeing respected journalists in Chicago use insensitive verbage or immediately question Rose as to how and why he's positioned himself in such a fashion is, frankly, sad. This is the new reality of life in 2014 and beyond, as social media will quickly remind you that when someone takes a stand on something, there will be many who will voice their opinion in opposition of said belief.

A hit dog will indeed holler.

"They have to get involved socially. They have to because it affects them, too. And it affects their families. They grew up in these situations; they must not forget that. They [were] once poor, they went to inner-city schools that didn't have technology or computers, they didn't have good books. See, I went through that whole situation. They went through that as well. A lot of their cousins are still going through that, so they must not forget that. I hope that they would do more." -- Magic Johnson

If Magic's words ring true, and players like Rose and LeBron James continue to use their pedestal to take a stand on issues, then there will be more hit dogs. Who knows, maybe if folks start hollering, more people will start paying attention.

11 Replies to “Derrick Rose Is The Man”