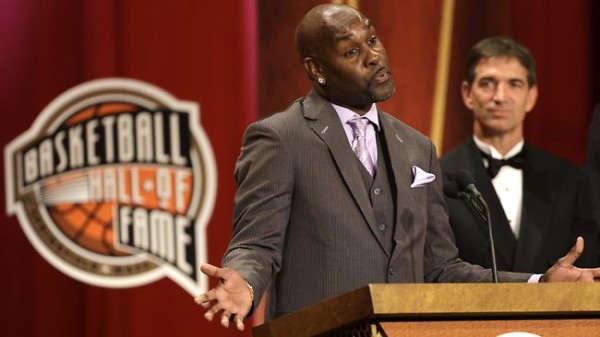 I've got a real issue with the NBA Hall of Fame ceremonies that take place every year in September. For one, I don't think it's presented very well. For two, I hate that the Hall of Fame is located in Springfield, Massachusetts. For three, why in hades is the enshrinement on the opening weekend of the NFL schedule? None of this makes any sense and I'm fed up.

With that being said, my all-time favorite point guard was officially installed as a member of the 2013 Hall of Fame class on Sunday, as Gary Payton's name was called to join the all-time greats.

There's no reason to recite The Glove's accolades in this space, but there's no question that Payton is universally respected across the board as being the best defensive point guard of all time along with being one of the 10 best point guards of all time. Along with an elite-level ability to trash talk, we had no choice but to give love to The Glove.

(My trash talking) was all for my crazy love of the game... I don't regret the way I went about it and I'm a strong man today as a result. But I can't help but think I could have given more to the game that gave so much to me. My career is complete. Gary Payton is evolving, but GP is in the Hall of Fame. -- Gary Payton

Below is the enshrinement speech of Payton, where his praise of John Stockton is a cool moment where greatness recognizes greatness. Also, GP acknowledges his "George Foreman moment" when he named two of his sons Gary II and Gary Jr. (LOL) and big ups his home by talking about the Yay Area.

Enjoy the speech, and enjoy your fresh out the oven reading material for Monday morning.

Topsy Wants to Help You Twitter Stalk - The Loop 21

24 Things That All Women Do Or Have Done - Thought Catalog

Did I Ever Tell The Story Of How My Friend Almost Died On Molly? - The Smoking Section