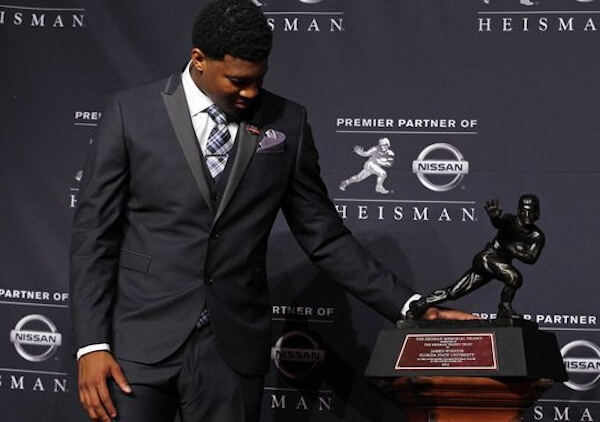 This all starts with a conversation I had one night with one of the biggest Florida State Seminoles fans I know, TSFJ's own Garfield Hylton.

The crux of the conversation was the amount of faith Florida State fans were immediately putting in Jameis Winston, which at this point the young man had only played in a grand total of three games. The reason I even asked about their faith in Winston was because this same team was the one that has now promoted two quarterbacks to the NFL that were drafted in the first round. (Christian Ponder, E.J. Manuel) Without any hesitation whatsoever, Garfield quickly responded by cussing me the hell out. The man called me blind, the man questioned my football knowledge and the man wondered if I was pulling wool over his eyes.

In short, FSU fans had been sold broken dreams in the past that eventually turned into nightmares. In 2013, those same fans are now experiencing their ultimate dream. A dream that turned into a reality. A reality that had exceeded their wildest dreams. The wildest dreams being to have not only the best player in college football, but to have that player lead their team to the precipice of a national championship.

Then the rape case happened.

There's no need to go into the details of what happened in regards to Jameis Winston, I trust that you are up to speed on this. However, in regards to what we do with selecting who the '5 Coolest' are for this given year, it's mildly fascinating to note that 3 of the last 4 Heisman trophy winners (Newton, Manziel, Winston) have faced an incredible amount of scrutiny for reasons that took transpired away from the football field. In the case of Winston, being a 19-year old redshirt freshman and dealing with the possibility of living in infamy for the rest of his life, and yet the man performed at a supremely elite level while being the consummate leader in the process...I'd like to think that he was so young and dumb that he didn't know any better that he should be nervous and frazzled a bit.

But then there's that gold chain he always wears.

I didn't notice it the first 17 times I saw Jameis Winston up close and personal on my television, but then I saw two different events happen that made me laugh my balls off.

ONE: Jameis Winston was dressed in your typical student athlete formal attire. Dress shirt, slacks and a tie. Only problem was, the man was wearing his gold chain on the outside of his shirt and over his tie. In fact, I believe his chain was caught up on the collar and just made it more than a spectacle.

TWO: Some people have menial jobs. I don't say that to poke fun, because having any job in America feels like a privilege at this point. However, when I saw a man get on his tippy-toes to put on Jameis Winston's gold chain (that his girlfriend gave him) before a game, I was just curious as to what it takes to get THAT job. (Props to The Big Lead for the GIF)

The point is, as absurd as it was that he'd wear his chain so much, I became mildly fascinated with it. I gave it a name (Goldie) and everything. I wondered what the dialogue was between Jameis and the dude that puts on the chain for him.

Chain Boy begins to pull out Jameis Winston's gold chain out of a Crown Royal bag. He breathes in the chain and buffs the chain on his shirt. Once the shine is at peak levels, Chain Boy puts the chain on Jameis. Chain Boy then pulls out a mirror for Jameis to use. Jameis admires himself in the mirror for 12 minutes.

Here is the season of Jameis Winston in a nutshell. The man had the best quarterbacking season in the history of Florida State Seminoles football. The man overcame an accusation that (rightly or wrongly) I wouldn't wish upon anyone. The man is a walking endorsement for the All Gold Everything video with his gold chain and the Heisman.

All in all, not a bad first season in Tallahassee for #5. Now let's see if he can get a national championship to kick off his campaign for 2014.