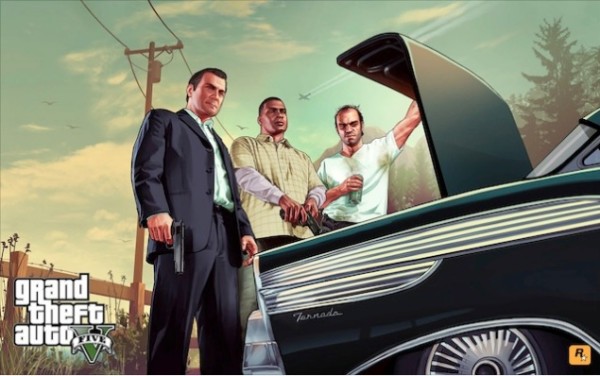 You ask any person who has played any version of the world famous Grand Theft Auto video game franchise how many hours they've logged playing said game, they'd probably answer one of two ways:

So for those of us who have committed way too much time playing a game that always has a new trick (or 38) up its proverbial sleeves, Grand Theft Auto V brings us a radically different game, one focused on three players instead of one, and a game where the focus is on making big heists while navigating through the random encounters and hilarity that takes place in Los Santos. (i.e. Los Angeles)

I can only speak for myself, but one of the joys in playing GTA was the fact that for a brief moment in time, you felt like you could escape from reality into another reality, which was almost real. You know, besides the fact that you probably couldn't carjack a bugatti, shoot up a burger joint because it took too long with your food, rob the Russian cartel for all their loot and then watch Katt Williams do a standup performance all in a single day in the real world. Well, okay, maybe the Russian cartel part. The folks over at Kotaku made note of just how expansive this new GTA V could and probably will be:

The Rockstar guys also told me how huge the game is and all that's in it. Well, some of what's in it: military bases, beaches, mountains, rivers, meth dealers, biker gangs.... the whole map is open from the start. Biggest weapons list ever. Biggest vehicle list, many of them customizable for looks and performance. Cars. Trucks. Motorcycles. Bicycles. Jet fighters. I saw a jumbo jet in the sky. Can we fly that? Not sure, probably not. These games have limits.

The metaphor Rockstar likes for this game is long-form narrative TV with an ensemble cast. Cut from one character to the next. Skip the parts where characters are doing boring stuff and go right from interesting scene to interesting scene. That doesn't mean the game is all missions and no wandering. Rockstar gives every sign that there will be a ton of wandering permitted. They also give the impression, though, that the character switches will let them keep players surprised and entertained. Take that transition they showed me from Franklin walking off his parachute drop to a bloody Trevor chilling on the beach in his underwear.

Man, what? Chilling on the beach in my drawls while covered in blood? Yes. A nine-hole golf course in this game that you can play and choose your clubs? Yes. The ability to take yoga classes in the game? Yes. Stick up people at the ATM machine? Yes. All in a day's work in my escape from reality to almost actual reality, via the video game. Grand Theft Auto V (Triple Threat Heists?) hits stores on September 17th for XBox 360 and PlayStation 3.

One Reply to “Evidently, You Can Take Yoga Classes And Play Nine Holes Of Golf In Grand Theft Auto V”