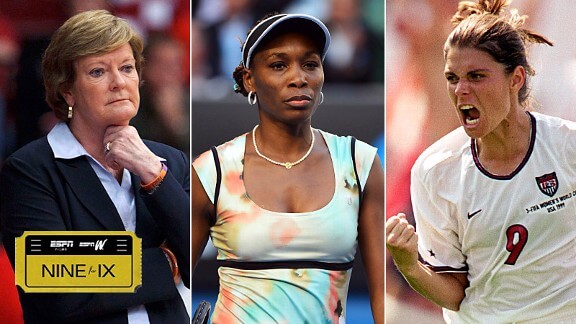 Go ahead and scan ahead on your DVR's and hit the record button, it's that time of year again where ESPN Films brings the people another series of documentary films for us to enjoy again and again and again. Following the spirit of ESPN's 30 for 30 series, ESPN Films and espnW have partnered together to produce nine new films that focus on captivating stories of women in sports told through the lens of female filmmakers. The series itself will be called "Nine for IX," and the executive producers are legendary media member Robin Roberts and Jane Rosenthal.

Here is the listing of films that will air beginning on July 2:

The series is scheduled to premiere on July 2 on ESPN, and the films will air over consecutive Tuesday evenings at 8 p.m. ET. You can also check out a cool piece from Robin Roberts on why "Nine for IX" matters over at espnW.