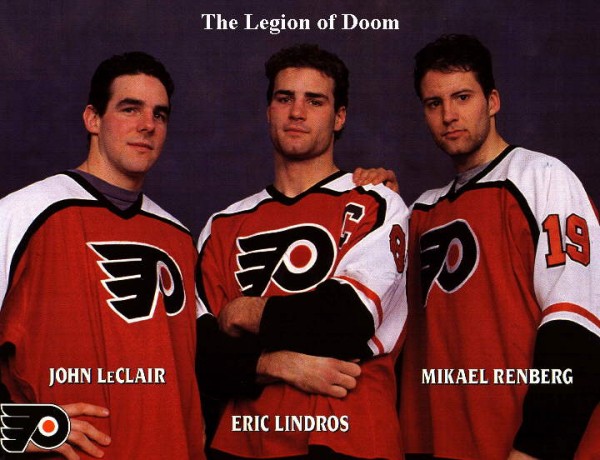 None of this is the Philadelphia Flyers fault. This is all on me.

I can remember one night, maybe two years ago about this time, when the Flyers were battling the Chicago Blackhawks for Lord Stanley's Cup. The Flyers were on and were doing well; thus, giving me the opportunity to tweet about it. Now, for many (me being "Ed The Sports Fan"), it seems natural that I'd talk and tweet about hockey. This is kinda what I'm known for. Of course, the people that know me for real, decided to pull my "fan card" if you will.

@soulonice6 @edthesportsfan You are not a hockey fan. Stop it.

@thetillshow We don't believe you, Ed. RT @soulonice6 @edthesportsfan You are not a hockey fan. Stop it.

Can't front; it stung to hear two of my homies call me out in public in such a fashion. However, it stung, because it was true. I hadn't been committed to my fandom of the Flyers and to the game of hockey.

If I had to rank my focus and appreciation for each and every sport, it'd probably go something like this: Basketball, Football, Baseball/Soccer (tie), Hockey, everythang else.

Somehow, soccer leap-frogged hockey, and I'm not sure when it happened. I do know how it happened. It happened because my soccer viewing doesn't compete with any of the other sports that I watch frequently. Soccer comes on at 7am and 10am Eastern time on Saturdays and Sundays. At the latest, soccer matches could come on around 2-3pm, and there's still no real conflict to my weekend sports television programming.

I don't have the bandwidth to watch and keep up with as many sports as I used to. When I was young, with minimal responsibilities outside of taking out the trash and keeping my room clean, I could keep up with damn near every sport under the sun. As an old man, it's harder to even keep up with baseball, the sport I've played the longest in my 28 years on this Earth. I genuinely miss hockey, and at this point, I have to literally schedule time to watch her. It's a damn shame.

They are the resident hockey editors here at The Sportsfan Journal. They are also fans of the Philadelphia Flyers. The relationship we have forged over the years is partially because of our mutual appreciation of the Broad Street Bullies. Without them, I'd probably be even more oblivious to what was going on in the world of the NHL, much less my precious Flyers.

My hockey fandom grew from my admiration for The Legion of Doom and the Crazy Eights of the Flyers in the mid-1990's. When I was 12, Eric Lindros might as well have been the Based Hockey God in my eyes. John LeClair was the most underappreciated hockey player on Earth and Ron Hextall made me as nervous as every other Flyers goalie I can ever remember playing in between the pipes. This is Ed the Flyers Fan at his finest.

Here's the funny thing; I'm not alone in this. Many of you have an intrigue and sincere appreciation for hockey. Yet, for one reason or another, you too have succumbed to not giving hockey enough time. If it takes the playoffs for you to get interested in the game again, so be it. You know why? Because there are tons and tons of basketball fans who complain they can't get into the game until March Madness/NBA Playoffs tip off.

Well the puck has dropped, and I'm all in. Okay, I'm in the shallow end of the pool, but I'm in there. Let me enjoy my Flyers, and let my hockey connoisseurs Trible and The Rev serve as my floaties.