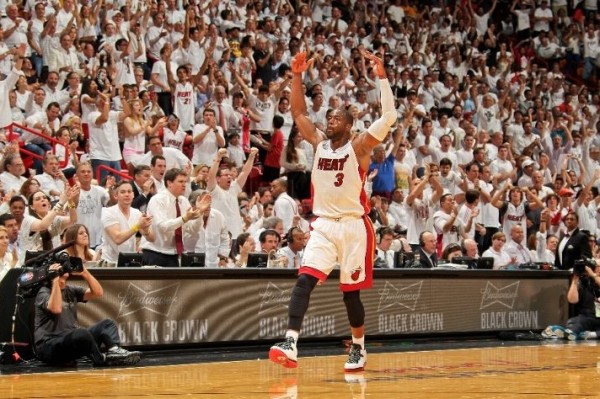 I remember sitting down yesterday eating two tacos from Jack in the Box. These tacos cost a grand total of $1. While I was eating said tacos, I began to think about the upcoming contest between the Indiana Pacers and the Miami Heat in Game 7 of the Eastern Conference Finals. My stomach began to toss and turn as I began to process what would be happening in a few short hours. (Not to be confused with those cheap and disgusting tacos that I devoured … I’d be processing that later.) Would Miami be able to provide additional support to LeBron James and continue its quest for historical relevance? Or would Indiana be able to dethrone the King and take its own championship journey?

Not if Dwyane Wade’s knee had anything to do with it.

Yes, LeBron James put together the most dominant and quietest 32-point, 8-rebound and 4-assist game ever known to mankind, but what was mind-blowing was what Dwyane Wade did on Monday night. His stat line looked like the D-Wade we’d come to expect in recent years (21 points, 9 rebounds), but what was more astounding was the physical effort he put forward.

He was crashing the glass.

He was playing tight man-to-man defense.

He was even doing that one move where he takes the ball from right to left above a defender’s head as he attacks the rim.

I hadn’t seen that guy play basketball in months, and it was a jaw-dropping thing to see. I joke-tweeted that Wade must’ve had knee surgery on Sunday and used Wolverine’s metal (adamantium) as a replacement for his weary bones. Or maybe it was cortisone shots. Or maybe Pat Riley performed a séance. Or maybe they got Mr. Miyagi to use his healing hands to repair what ails Miami’s favorite two-guard. Who knows. Whatever they did, it worked.

So now LeBron doesn’t have to use his royal scepter and bludgeon his teammates to death because he didn’t have to go into “Cleveland-mode” to win Game 7. (Sidenote, can we come up with ways to use this in regular life? Like when folks are struggling to come up with a plan for the weekend, and one person has to pick a location, round up the folks and buy a couple of shots to get folks warmed up, can we call that going into Cleveland-mode? Yes? No? Maybe? I’m going to do my damnedest to use this soon.) Which is good, because it was obvious that LeBron wasn’t happy with his fellow big three-mates …

“I cannot afford to have you two struggle again.” – LeBron, referring to Wade/Bosh

… and now we get our sorta-kinda rematch of the 2007 NBA Finals. Miami vs. San Antonio. Big Three vs. Big Three. Popovich vs. Spoelstra. LeBron vs. the legacies of the GOATs.

Basketball Game Seven: Where Legends Are Born And Others Are …
2