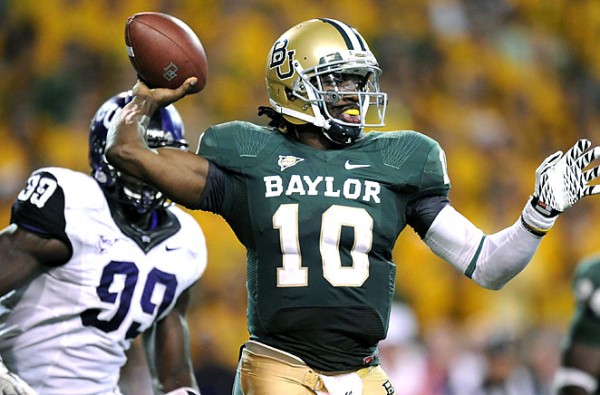 The Washington Redskins have decided to put all their chips in, as the completed trade with the St. Louis Rams will yield two future first round picks and this year’s second round pick to move four spots to select Robert Griffin III with the number two pick in the upcoming NFL Draft. Give credit to the Redskins, a team that's never been afraid to throw money at their problems. In this case, the Redskins threw their future draft picks at their problem, but as what's always the case...did the Skins overspend to get their guy?

The biggest haul before this was what San Diego gave up (Chargers traded Eric Metcalf, Patrick Sapp, number three overall, #33 overall, and 1999 first rounder for the number two overall pick to select Ryan Leaf) for the rights to Ryan Leaf at  number two, or what the Colts gave up (Indianapolis traded Chris Hinton, second-year receiver Andre Rison, next year’s first rounder, and the #121 pick, for the #83 pick and the number one overall pick to select Jeff George) for Jeff George at number one. This current deal dwarfs those by at least one more first rounder. It also seems to me that the price paid has little to do with how the player turned out. However, it did likely have to do with how desperate the franchise was to provide hope.

The key wording there is at the end of the quote, desperation...hope. The Redskins have repeatedly (and blindly) thrown their financial resources at their issues, at times, in an act of desperation to win immediately. Of course, Redskins fans were initially open to the changes, but now, they  just live with a false sense of hope anytime Daniel Snyder goes sign someone for $20 million more than they're worth.

Of course, the other scary thing is that Robert Griffin III could end up like the highly desired, but inexplicably terrible quarterbacks that were traded for in Leaf and George; both blessed with insane talent, but never had the mental capacity to actually be worth a damn. Griffin's mental isn't in question, but you wonder if the stench of Washington's losing past will suck in RG3 and spit him out just like every other quarterback in 'Skins history after Mark Rypien took the snaps.

Pray, Skins fans. That's all you can do at this point...pray.

3 Replies to “Did the Washington Redskins Overpay For Robert Griffin III?”