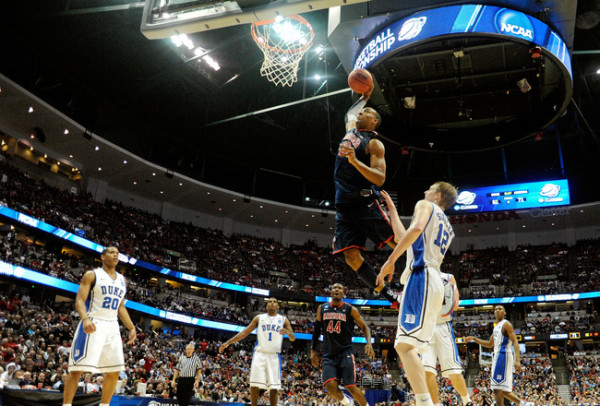 A trade was made between two middling teams in the NBA's Western Conference that might not raise a blip on basketball fan's radar. The Minnesota Timberwolves will send the 2011 No. 2 overall pick Derrick Williams to the Sacramento Kings in exchange for Luc Richard Mbah a Moute in a trade.

Here are the particulars per the Minnesota Timberwolves' press release (courtesy of Zach Harper of CBS Sports):

The Minnesota Timberwolves today announced the team has acquired forward Luc Mbah a Moute (BAH-ah MOO-tay) from the Sacramento Kings in exchange for forward Derrick Williams.

"We are excited to acquire a solid veteran player in Luc Mbah a Moute,” said Flip Saunders, Timberwolves President of Basketball Operations. “Luc is known as one of the premier defensive players in the league with an ability to guard multiple positions. He adds a lot of energy, grit and a high basketball IQ to our team. We thank Derrick for his contributions to our organization and wish him well in Sacramento.”

Personally, I thought Derrick Williams was always doomed in Minnesota the day he was drafted. Asking a tweener forward like Williams to play with arguably the best power forward in the game who has as much range (maybe more) as Williams in Kevin Love is asking a lot from the basketball gods. In 2+ years in Minnesota, it never worked out, and now Williams will be taking his talents to Sacramento to forge a new path out there.

However, there's a reason why many of us began to fall in love with Derrick Williams, and that started with his two seasons of dominance as a member of the Arizona Wildcats back in 2009-11. The young man evoked memories of players like Glenn Robinson, Rodney Rogers and Michael Beasley with his play under the direction of legendary head coach Lute Olson, and seeing how Arizona's always been one of my favorite college basketball programs, I immediately became a fan.

So when the day came that the basketball gods decided to give us a 2011 clash of titans between the Derrick Williams led Wildcats and the Kyrie Irving led Duke Blue Devils, the calendar was cleared, wings and libations were purchased and a reservation for one was made on my couch in front of the 51" Hoshitoshi. Duke vs. Arizona in the Sweet 16? Yep, nothing else matters at that point.

And then Derrick Williams happened.

ONE: Derrick Williams finished his sophomore season at Arizona shooting 57% from 3-point range. The man is 6'8" and 240 pounds. So yeah, I see why Minny took him at No. 2

THREE: No one ever really talks about the 2011 NBA Draft like they do other drafts, but the path that Kyrie Irving has taken as the No. 1 pick of that draft compared to Derrick Williams has at No. 2 seems like night and day. Kyrie is now edging on becoming a superstar in The Association while Derrick is leaving Parts Unknown for Siberia. I don't think Derrick's career is floundering, but like I said earlier, a change of scenery could be the best thing that happens to him. (He might need to find a way to get out of Sacramento sooner rather than later. Sorry Boogie.)

Related: Taking A No. 2: The 2nd Overall NBA Draft Picks From The Past 20 Years

5 Replies to “Derrick Williams Got Traded Today, So Let's Reminisce Back To When He Single-Handedly Destroyed Duke”