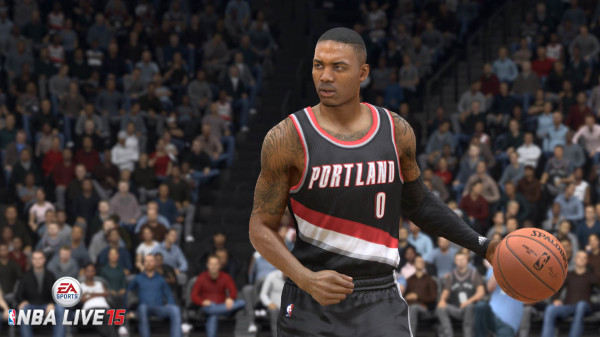 When I was in college, one of the things that my friends and I would do to pass the time is turn on some instrumental versions of our favorite songs and try to rap over the beat. This activity wasn’t about determining who had a chance to sign with Jay-Z and Beanie Sigel on Roc-A-Fella Records, more so that we were all so bad at rapping that we had no choice to laugh at each other. The thought of actually rapping in front of someone with cache was the last thing on my mind, but last week I was afforded the opportunity to freestyle rap for NBA All-Star point guard and originator of the #4BarFridays freestyle rap social media phenomenon Damian Lillard.

It wasn’t organized this way, as the reason why I was talking to Lillard was that in would be unveiled on Monday morning that the Blazers’ favorite point guard would be on the cover of EA Sports’ popular basketball video game NBA Live 15. I knew that my time with Lillard would be limited, and I knew that have dealt with plenty of media interviews prior to me, so what would be the one thing I could do to get his attention? Freestyle rap four bars. (For those unfamiliar hip-hop nomenclature, a bar is the equivalent of one or two lines in a measure, or one four-count beat.)

“Would you be okay if I spit four bars for you to get the interview started?” — Ed

Of course it’d be perfect Damian, of course it would.

For an awkward thirty seconds, I stammered through my four bars. References of EA Sports and the East Bay came out of my mouth off the top of my head. (because written raps are not allowed) When I finished, all I could think of is that I’d just ruined what little reputation I had. Instead, I was greeted with the greatest of validations.

“AYYYYYYYEEE…..I’m gonna need you to clear that delivery up, that was good though. I appreciate it.”

A couple of things quickly…

ONE: I’m nervous as hell. If you can’t tell.

TWO: I stuttered and stammered at least 12 times.

THREE: I’ve listened to way too much Do Or Die and Kanye West. Cabrini Green? For why though?

FOUR: Seriously, the AYYYYYYYEEE followed by my AYYYYYYYEEE might be one of the greatest moments in my life.

FIVE: The entire explanation of being from Oklahoma was totally unnecessary. Did I say I was nervous?

The moral of the story? We’ve all tried to freestyle rap once or twice in our lives, and more often than not, it ended terribly. But who cares, right? You just might get one of the best point guards in the world to co-sign your wackness and give you an AYYYYYYYEEE in the process. All hail Dame Lillard and #4BarFridays and be sure to checkup my full writeup on #0 and NBA Live 15 on SB Nation today.

by Eddie Maisonet, III time to read: 2 min
Basketball Under Armour Vs. Nike: 11 Of Your Favorite Writers…