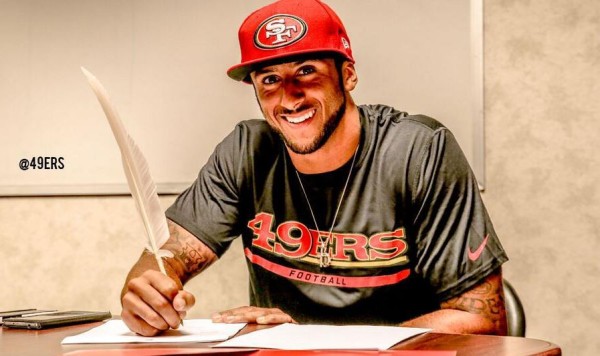 If you hadn't heard, some quarterback for the San Francisco 49ers just got paid a little bit of change on Wednesday.

Colin Kaepernick the Niners agreed to a new contract extension that extends to 2020. Per SOURCES, the deal is worth $126 million with $61 million guaranteed. Yes, $61 million. If you didn't know, that's the most ever guaranteed in an NFL contract. I'm convinced that all sports fans who consistently concern themselves with the financial ramifications of athletes signing egregiously large contracts are just mesmerized by big numbers.

The cool thing about numbers, both of the statistical and financial variety, is that they immediately provide the opportunity to draw comparisons to one's peer group. Suddenly, people look at Kap's contract and they begin to look inward to their own teams and their current quarterback situations. Take Louis Bien's note on Kap's new deal into consideration:

Depending on who you're a fan of, a variety of emotions could overcome you. Anger could take over. Concern might set in. Laughter could erupt from your soul.

Many believe that Kaepernick simply isn't worthy of this type of deal. That 23 games as the quarterback of arguably the most stacked team in the NFL doesn't merit such financial compensation. But what are we really talking about here? $61 million guaranteed over the first three years of his deal? If you think Kaepernick's going anywhere in the next three years, or that his game will seriously fall off by the time the next World Cup happens in 2018, then I've got some beachfront property in Oklahoma to sell you. Giving Kap that $61 million guaranteed in the first three years of the deal is a win-win on both sides and could end up making it easier to sign players like Michael Crabtree moving forward.

But okay, maybe you're concerned that Kap's salary number will take up too much of his team's cap number. Well, let's throw his name and his team up against the wall versus A-a-ron Rodgers and his Packers and Slinkyneck Manning and his Broncos.

While Kap's team is currently committed to spend $20M-30M more than the Pack and the Broncos, the Packers and Broncos are on track to need to pay younger players while the Niners will need to shed a few veterans by next season. Moreover, while Kap's cap number will slightly increase year over year, so will the league's salary cap and team spend. This isn't to say that Kap's money isn't large, but in the grand scheme of things, he's not hitting his team's balance sheet quite like teams such as Green Bay and Denver.

But it's easy to take a direct comparison to two of the elite quarterbacks in the game. Elite, Kaepernick surely is not — yet, anyway. (Although his hairline surely is.) But we live in a world in which the National Football League has a scarcity issue in supplying quality quarterbacks. We live in a world where the services of journeyman Carson Palmer commands $12 million a year (2014) and Sam Bradford's 2014 payout is larger than both Rodgers and Peyton Manning ($17.6 million). But are the 49ers in any position to let Kap walk? Who could they get on short notice to replace him? Kyle Orton? Ryan Fitzpatrick? Tyler Thigpen? Yuck. Blah. Shit.

If you held a gun to a football fan and asked him or her to choose between Tony Romo and Colin Kaepernick, either answer would be a correct one. Romo does some things that Kap can't, and vice versa. Are we talking in the immediate future, or are we taking a macro-view and projecting for the next decade? Who's the coach? What type of system does he run? What's his talent like around him? Both QBs are really good. Both have their faults, too. Me personally, as a Jacksonville Jaguars fan with no idea how good Blake Bortles will be, I'd take either QB in an instant.

And that's the point here with this contract and the state of quarterbacks in the NFL. You either have a quarterback or you don't. If you don't have a quarterback, you're desperately trying to figure out how to get one, immediately. If you do have a quarterback, you must do everything in your power to retain his services, because the used QB lot doesn't look all that great and picking the right QB in the draft might as well be like projecting if the next Adam Sandler movie will be good or not. There's a chance it'll be good, but more than likely, it will suck. That's why Kap got his money, and it's why people should stop losing their damn minds over it.

2 Replies to “Colin Kaepernick Cashes Out, Everyone Loses Their Damn Minds”