Those were the words of current Oklahoma State head coach Mike Gundy. While Gundy was ranting and raving after Daily Oklahoman columnist Jenni Carlson asked a few tough questions about his quarterback Bobby Reid, those five words put every 40-year-old man on alert across the country.

My manhood at 40 years of age shall not be questioned, and you will respect my authority.

While many of us make a big deal of turning 16, 18, 21, 25 and 30 … when someone turns 40 years of age, there’s no denying that a person has experienced a thing or three, that at this point there’s no more tricks to learn and that you will refer to said person as sir or ma’am.

That’s not to crown someone as a “senior citizen” or as someone that is now incompetent, feeble and decrepit. Most folks in their 40’s are ones that I revere as my mentors, ones that are still relatable to generations past, present and a future generation that has no clue what they’re getting themselves into.

Larry Wayne “Chipper” Jones is one of my three favorite Atlanta Braves of all-time, along with the great manager Bobby Cox and one of the crowned conquistadors of the Light Skinned Coalition in David Justice. Since Chipper broke into the big leagues in 1993, wearing No. 16 and playing shortstop, you could tell he had “the juice.” Actually, Chipper began his career with the Atlanta Braves at the lowest point of the franchise, when I became a hardcore fan at age 6. The Braves finished last in 1989, and as a result in 1990 the Braves were gifted with the No. 1 pick. Chipper represented the new face of the organization, and the Braves were going to live and die by the successes of Chip. The 1999 NL MVP, 8 All-Star selections, the 2008 batting champion, ’95 World Series champion and the unquestioned captain of the Braves accomplished anything and everything that was ever expected of him.

On March 22, 2012, the Braves announced that Chipper would retire following the 2012 season, after 19 Major League seasons with the team.

Brett Lorenzo Favre is unquestionably beloved and revered by Ken and Ed here at TSFJ, way back since the Ed The Sports Fan days when two young whippersnappers didn’t have anything to lose. (We still don’t, by the way.) Yet, Lorenzo Favre was wavering on deciding to come back to play in his 19th season (notice a trend) and playing at age 40. We all know the story: the Jets were done with him after a 22 TD/22 INT season, and Minnesota was in desperate need of a quarterback. The helicopter, the constant media coverage, the slander on Twitter and everyone abuzz about a greybeard’s situation was overkill to the nth degree.

Yet, Lorenzo Favre came out and had the greatest statistical season in his entire life at 40 years old. Outside of Favre haters and Green Bay fans, it was one of the most captivating things we’d ever seen. Lorenzo Favre swung the power of the NFC North to the Vikings. Lorenzo Favre made Adrian Peterson even more terrifying. Lorenzo Favre was singlehandedly winning hapless souls fantasy football championships they had no business winning. (Me.)

The Vikings finished the season 12-4 and went to the NFC Championship for the first time in 10 years. Lorenzo finished with 33 TDs/7 INTs.

On Tuesday, August 3, 2010, NBC Sports reported the confirmation of Brett Favre returning to the Minnesota Vikings, however he repeatedly mentioned that the 2010 season would be his final season.

Chipper Jones has had the swan song that anyone who leaves the game would want to have and then some. The man is being greeted with cheers at every road game, the man has fought through injuries that only old men deal with, and yet when the man is on the field, the man is coming through in the clutch. Time and time again Chipper has made plays with his bat and his glove, and every time he does it Braves fans begin getting selfish and ask the question …

Lorenzo Favre had the year of his life at age 40, and although his body probably was telling him otherwise (you all remember Bountygate, right?) the man came back for a 20th season at age 41. We all know how that ended.

Chipper’s preached all season that he’s not turning back, and will retire at the end of the season. Unless a World Series championship serves as Chipper’s final game of his career, my heart will undoubtedly want No. 10 to return for another season. Yet my brain knows better, and Lorenzo Favre gave us the blueprint. Chipper’s laying it all on the line for one more chance for ultimate glory, and it’s been one of the most gratifying things to see.

Related: Chipper Jones wins it with two-out walk-off homer, talks on-field after the game about the Braves’ rally in the ninth and his three-run walk-off homer (MLB)

6 Replies to “Chipper Jones, Brett Favre And Being A Man At 40”

Chipper Jones, Brett Favre And Being A Man At 40 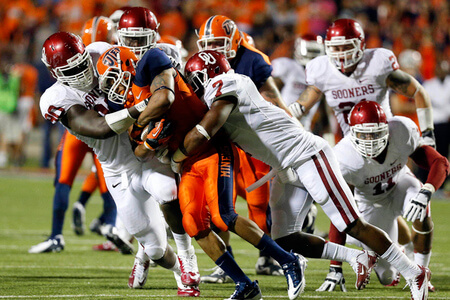 Ed The Sports Fan Starting Lineups: The Oklahoma Sooners Are The Fla…
6